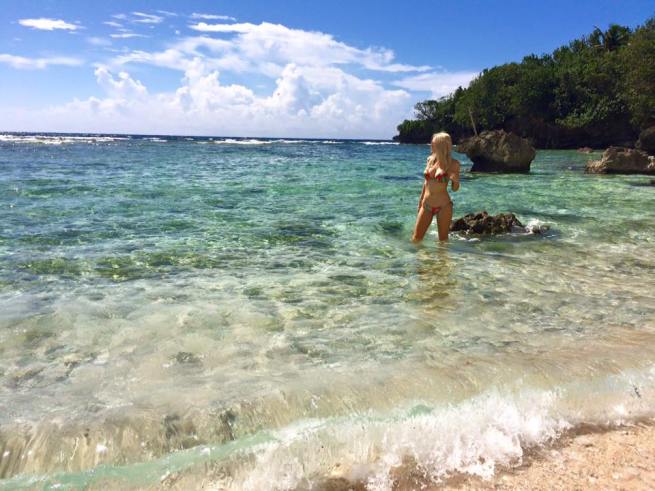 Growing up, Guam meant one thing: brown tree snakes coiled up in your toilet.

It was an undesirable duty station for military personnel, and certainly not an exotic tourist destination.

But Chuck goes to Guam a lot for work, and he loves it. He kept pestering me to meet him there, and since he so rarely gets excited about one particular location (and I plan the bulk of our travel adventures to begin with), I decided to book a flight for Labor Day Weekend. It helped that the government had him covered, so it was going to be a cheap vacay in the scheme of things 🙂

… But Guam blew my mind. It wasn’t necessarily the people or the culture, but the landscape. WOW! It was everything I had hoped Okinawa would be, with beautiful, crystal clear blue waters in which to frolic like a mermaid. 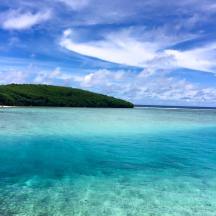 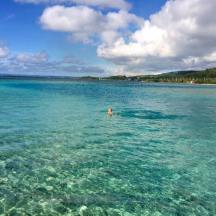 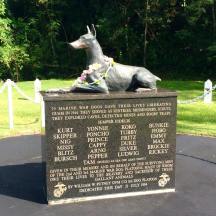 That evening, we enjoyed a delicious dinner at the surprise gem “Papa’s.” I had an amazing Ahi Tuna Katus dish with ginger garlic rice, while Chuck opted for the Bacon-Wrapped Filet Mignon. The waiter treated us to a complimentary ice cream dessert (the red velvet scoop was to die for!) We finished the night with a cocktail at the trendy, oceanfront Dusit Thani lounge and a balmy walk on the beach. 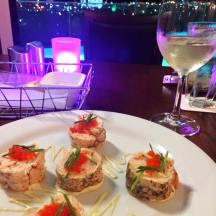 The next day, Chuck took me to Haputo Beach, which involves a somewhat lengthy, downhill hike. Some parts were so steep and treacherous that rope railings were tied to trees to facilitate our descent. The trees were straight out of The Jungle Book! When we arrived at the bottom, the scene that greeted us was truly spectacular. We enjoyed a bit of a photo shoot by the sparkling waters before exploring and snorkeling around various coves. We spotted starfish, sea cucumbers, and bright purple pieces of coral! 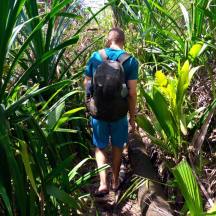 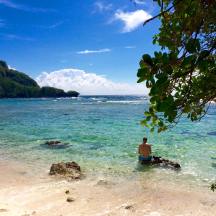 The hike back up the “mountain” was considerably more taxing than the descent, so we rewarded ourselves later with a fresh shower and dinner out. We enjoyed fun cocktails and ritzy window-shopping as we prepared to say farewell to Guam…

But better yet, we took one last walk on the beach at Tumon Bay to watch the sun go down… and it was truly glorious. 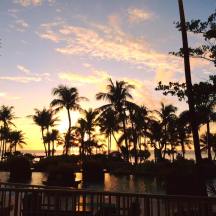