So, what actually got me to Europe in the first place? In my previous post, I explain how – despite having already completed my Master’s degree with GWU – I opted to audit a course in global public advocacy, which included a week-long residency in London. It was an opportunity I couldn’t pass up!

In my past visits to London, I never developed an affinity for the city. It is large and bustling and exciting, but lacks the charm and culture that I savor in Paris. This time around, however, I loved it (though still not as much as I love Paris.) Perhaps this is because I was not truly a tourist this time, but a student with more of a young professional experience. My hotel was perfectly located at Trafalgar Square, placing me within walking distance of some of the best neighborhoods – like Covent Garden and Regent Street. I am sure that helped! 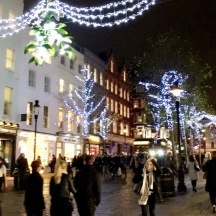 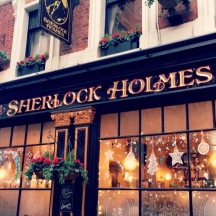 Famous pub across the street from my hotel 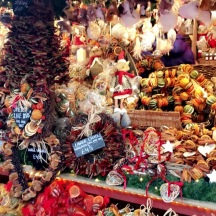 My schedule during the day was full of the most interesting speakers from various sectors of the British advocacy community. I met with Conservative pollsters, Labour-leaning think tank pundits, leaders in journalism and media, public affairs specialists from the U.S. Embassy, corporate communicators, government relations analysts, and representatives from trade unions and nonprofits. Of course, the implications of the Brexit vote and Trump’s election to the American presidency dominated the discussions (which fascinated me to no end), but we also heard from public relations specialists on other topics, as well. I particularly enjoyed hearing from Coca-Cola on the Sugar Tax, Hill + Knowlton Strategies on #TeenTalk, and APCO Worldwide’s “Better Than That UK” campaign against hate crime. I could write for ages about what I learned, but perhaps that’s better saved for another post, or an individual conversation 🙂

I did learn more about how I want to steer my new career trajectory, if I can find the right opportunities wherever I go next. I’d like to gain experience on a variety of topics by joining a global PR firm, which would offer a diverse range of clients and issues to manage. Then, I would hope to pursue a role with in-house communications strategy somewhere specifically, depending on what I gravitated towards at the global firm. If there’s one thing I’ve learned about life, however, it’s that it never quite goes according to plan – especially in the military. So, I’m trying not to get overly set on any one thing just yet. Of course, I would still love to work in Europe someday! A girl can dream, right?

Touring my old 2005 stomping grounds at Parliament. We weren’t allowed to take many photos!

So, enough of the boring work stuff 🙂 I did have some free time, of course. The first few days I laid low, because I felt the sniffles coming on and didn’t want to get full-blown sick. There were also some obligatory dinners to attend, one at the Churchill War Rooms (very cool/creepy), and one with GWU alumni.

When I was feeling better, I made plans to meet with a friend from DC, who is now living part-time in London. We enjoyed wine and pizza in Covent Garden and caught up on everything from work, to travels, to mutual friends, to relationships. I also booked a ticket to see the English National Ballet perform The Nutcracker at the London Coliseum, since I was unable to watch the Paris Opéra Ballet perform Swan Lake while in Paris the week before (it was all booked up.) It was perfect, and helped catapult me into the Christmas spirit (which is hard to avoid in the merry and bright London community, anyway.)

Catching up with Alex 🙂 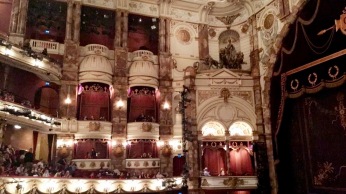 Ready for The Nutcracker at the London Coliseum

Side roads near Regent Street

On another free evening, I wandered over to Regent Street to check out the famous Christmas décor, and during our free afternoon mid-week, I meandered around a variety of shops and found the most adorable, eco-friendly spot called Neal’s Yard, where I may or may not have done some damage with a little shopping…

The most surprising thing about my week in London was that I didn’t freeze my ass off, as I expected after 3 years of living in a subtropical climate on Okinawa. It was certainly chilly, but I was remarkably comfortable. I apparently planned well with just the right layers of clothes. I’m not sure if the temperatures I experienced were typical for that place and time, but it turned out that it was much, much colder in my “hometown” DC than in Paris and London. Gave me hope for living there someday!

So, London… when will I see you next?!

Parliament looking like something out of a Harry Potter film

One thought on “Christmastime in London Town”