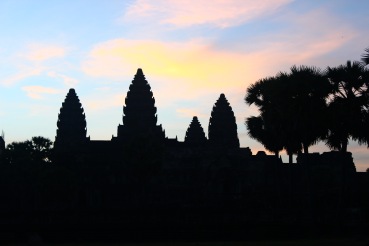 It’s perhaps a bit misleading to entitle this post as though we toured Cambodia, because in reality, we only visited Siem Reap. I knew we couldn’t leave Asia without seeing one of the world’s greatest wonders, Angkor Wat. Despite is reputation for being overwhelmed with tourists, nearly everyone we spoke with said it was worth visiting anyway. I took them at their word and booked the flight from Ho Chi Minh City so we could spend two full days in this city of temples.Siem Reap is known as the gateway to the ruins of Angkor, the seat of the Khmer kingdom from the 9th to 15th centuries. Of course, Angkor Was is the most renowned of these temples, but there are many in the complex. Since the temples were our only mission in Siem Reap, we were able to pace ourselves and relax after checking into The Privilege Floor at Lotus Blanc, a beautiful resort with even more beautiful pricing.

We ate dinner at the hotel and went to bed early. We needed adequate rest to prepare for  sunrise at Angkor Wat, which I had determined to accomplish despite the alleged crowds and my aversion to early mornings.

Let me tell you: it was worth it.

We hired a tuk tuk shortly before 5AM and felt invigorated by the cool morning air. As we entered the Angkor premises, that invigoration turned to squealing adrenaline-rushing as ill-fated insects met their demise against our faces and bodies while the tuk tuk sped to its destination. I was simultaneously frightened, disgusted, and saddened by the poor little bugs I pulled out of my hair and clothes.

We turned a corner just as the sky began to lighten, ever so slightly. I could sense that we were close, and to my surprise, I felt my throat tighten. I am not a particularly spiritual person, so I didn’t expect to feel emotional. Nonetheless, my eyes moistened as the dimly lit towers of Angkor Wat emerged above the trees.

For better or for worse, our trusty Canon Rebel was virtually useless for sunrise photos. The humidity had caused the lens to fog and we simply could not get it to clear up for longer than two seconds. The benefit of this was that we actually got to watch the sun rise over the temple, rather than obsess over getting the perfect photo of it. Of course, there was nothing to stop me from getting a few snaps on my iPhone: 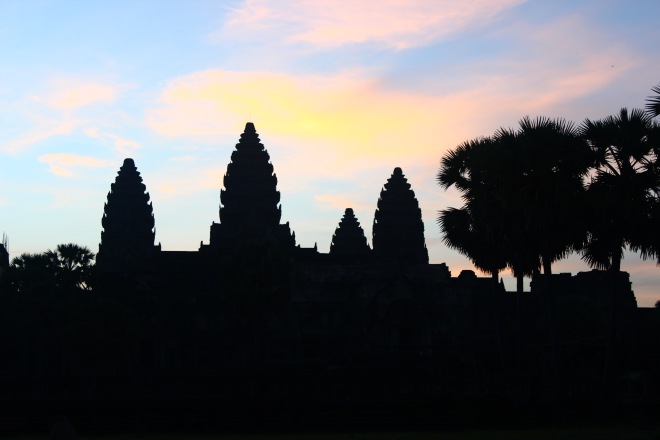 Seriously though, the photos don’t do it justice. You’ll have to trust me on that one. The other tourists were respectful, and there was minimal noise as the sun rose. The silence and haze of the morning only added to the peace of the experience.

We spent the next several hours exploring the grounds and the surrounding structures in the Angkor complex, thanks to our trusty tuk tuk driver, who stuck with us the whole day. Highlights included the Bayon, the Tomb Raider temple (Ta Prohm), a kitten sighting, and an adorable group of young monkeys frolicking in the trees. I wanted to love the Elephant Terrace, but it was much smaller than I had envisioned. Still, I was thrilled to see it! 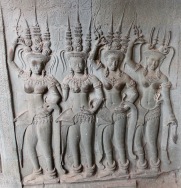 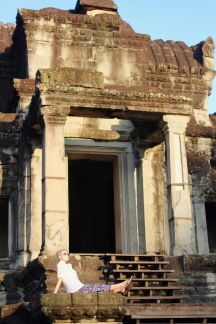 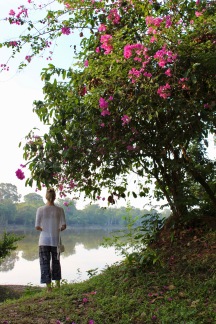 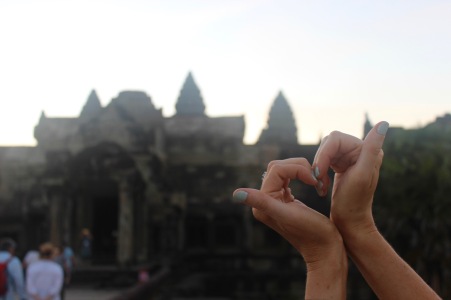 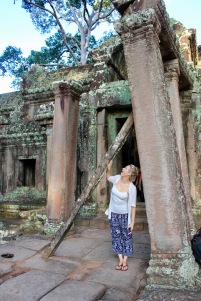 The Bayon, and the monks on a retreat 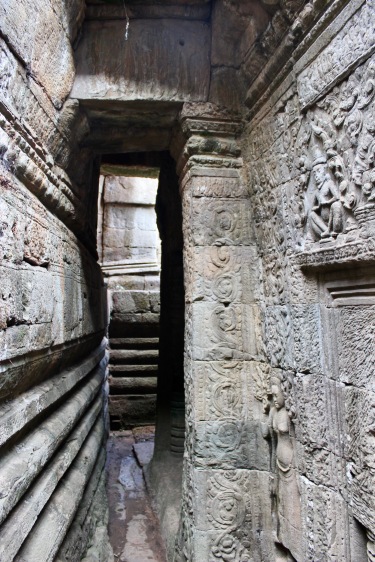 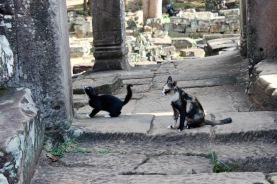 The cutest little kitten and his mama 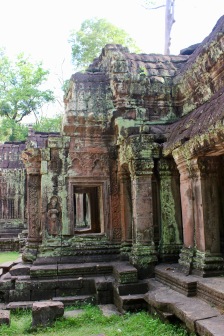 It got very hot very quickly, and I was grateful for the extra water we had brought with us. It was time to wind down. We returned to the Lotus Blanc for an afternoon of poolside recovery. 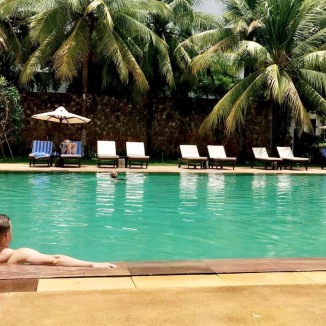 Feeling moderately refreshed – despite remaining in the heat all afternoon and consuming a few adult beverages at the pool – we ventured out for our dinner date and a visit to the night market. The Chanrey Tree had come highly recommended by a friend, and I was excited to try local Khmer cuisine. While eating my delicious and fragrant meal, I noted to Chuck that while European food tastes like a garden, southeast Asian food tastes like a spa. I couldn’t get enough of the local flavors! Especially the lemongrass. 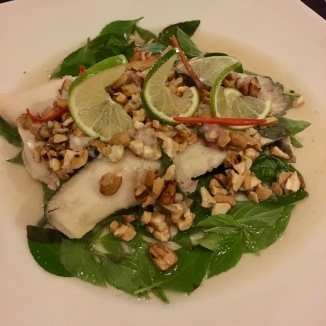 I had ambitions plans for the evening. Friends had told us that Siem Reap was actually a great place to have a drink and let loose a little, so we were thinking that would be our night. But something in me started to change…

Chuck thinks it was the heat of the day. We had been out 15+ hours, and had consumed alcohol lightly throughout the day. But I couldn’t shake some images from the day from my mind, especially as I started to see more as we roamed the market. Especially as I got more tired.

There were the elephants laboriously giving rides in the heat at the temples. The land mine victims playing music at Ta Prohm for donations. The shacks and shanties we sped past on our tuk tuk rides, with residents drinking dirty water that we bent over backwards to avoid. Then there was the competition and desperation locals demonstrated to be the one selected to sell us that bottle of water, or to help out a friend and use his tuk tuk. Then there was the fact that we were staying at a place called “The Privilege Floor” for $80 per night…

Then I met the scrawny little kitten, all alone outside the night market. Slightly skittish, not in terrible shape, but clearly separated from his mother and crying for assistance. Chuck insisted mom was close by and he would be okay. I wished I had tuna, and that he would let me touch him.

Then there was the man selling wares with large tumors on his face. Here I am fussing about wrinkles in my forehead and dimples in my butt, and this man will never have his tumors removed. They may even kill him. Then there was the old lady with the infant crying in her lap, right in the midst of the market’s hustle and bustle…

Anyway, I am pretty sure it was the kitten (and the heat) that put me over the edge. I walked around the market soberly, contemplating the exploitation and imbalance in this world, and Chuck decided wisely to nudge me in the direction of home. I felt foolish wasting our night out, but I couldn’t manage to raise my spirits. I cried in the tuk tuk on the way back to the Privilege Floor, but couldn’t help but laugh ironically a few times, too…

Oh, this life we lead. This planet we call home. So much to mourn, but so much to rejoice in, too. I had started the day reveling in the spirituality and light of the sunrise of Angkor Wat, and finished it deploring the world’s darkness, and pitying its have-nots. All in all, I think I was ready to leave Cambodia, after barely 24 hours – and Siem Reap isn’t even “that bad” when it comes to the poverty of the region. What a little wimp I am!

We spent the next day catching up on sleep, drinking lots of water, eating lots of fruit, and used our “privilege” further to get massages before departing for the airport. The insights of my existential crisis remained, but I was ready to cleanse by immersing myself in Nature at our next destination: Laos!