Yesterday, there was a break in the rain. Tiny bits of sunshine peeked out of the clouds, so I decided it was a good day for a bike ride to Uken Beach. I hadn’t yet ridden in that direction, so I was excited to see what I could find. It turns out that it makes for a slightly more intense workout than riding into the town, as the hills are more frequent – but Lord knows I need it, so bring it on  🙂 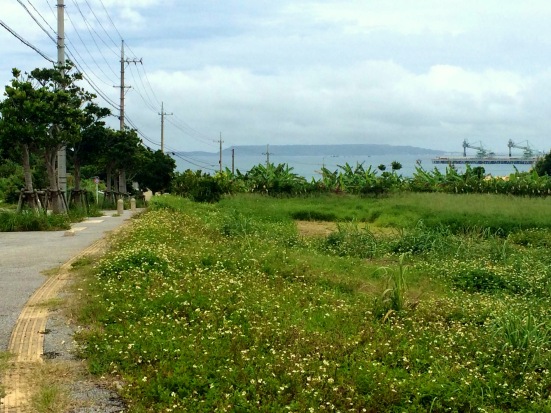 The top of the hill

As always, the destination was worth it. I perched myself on a rocky outpost and took in the scenery. Of course, that didn’t stop a young-ish Japanese lad from approaching me for a selfie (or an “usie”, rather), which was even more awkward than you’d expect because he spoke no English except for “peace” and “say cheese.” Other than that, the afternoon was quite enjoyable from my little perch, and I experienced no other intrusions to my quiet-time.

But, I had an ulterior motive for venturing to Uken Beach. Along one side of the road that takes me there is a series of Okinawan graves. They are really more like shrines, since some of the locals here engage in ancestor worship. Not only are they attractive architectural specimens, but they are also prime hangouts for my favorite furry friends. In Japan, cats are considered guardians of the dead, and protect against evil spirits. There are many stray cats here, and it’s true that you can find them among the grave sites, where locals respectfully leave food and water to keep them sustained. I spotted many, much to my delight, and even encountered one dodging my camera in between two shrines (is it bad that I snapped a pic of holy ground?)

Unfortunately, my tale does not come without woes. As I was slowly riding along, nodding a silent “konnichiwa” to each kitty I passed, I noticed this little guy, who appeared to be dying up against the cemetery wall. He was clearly mangey and infested with something, and flies swarmed around his crusty eyes and nose. He barely moved, and didn’t even react when I approached close enough to touch (I didn’t.)

At this point, I was fairly distraught. I couldn’t bear the thought of leaving him on the corner to die. But what could I do? I had a healthy cat under official quarantine at home! I made a few phone calls and learned that there aren’t many options for helping a stray, even though I offered multiple alternatives. All I wanted was to take him to a vet where he could get cleaned up and medicated, and I was happy to pay for it.

Since this was apparently not an option, I went for the next best thing – bringing a little joy into what was left of his life. I biked home and packed a tote bag with fresh water, tuna fish, and Frontline. I also brought gloves, just in case I was able to touch him. I hopped into Daisy and drove back down to the graves.

When I showed up to the original spot, my decrepit little friend was no longer there. A few other kitties were, and they had already been fed. I looked across the street and felt immediately encouraged – he was there, up and at ’em, with another group of kitties. I was so happy, because I really thought the old guy was at death’s door when I found him on the sidewalk! I walked over, pulled out the tuna, and was promptly surrounded by feline love.

While they ate the tuna, I examined the Old Guy closer. What I originally thought were mites were actually some sort of plant or thorn or seedling. One ear looked a bit infected, and he had no teeth. Clearly, he was very, very old. It also became evident that he was the dominant cat in the group, as he was occasionally testy with another adult male and seemed protective of the females (one of whom was pregnant by the contesting male.) It was actually quite fascinating to watch… like a pride of lions!

While King Cat drank water, I punctured the Frontline with the wing of my Tinkerbell key chain and squeezed it on the back of his neck. He didn’t flinch! He was so laid back that I decided it was worth trying to pet him.  With my gloved hand, I scratched his chin. He leaned into it. I scratched his cheek, and he leaned into that, too. I think he was trying to purr, because his breathing sounded rather labored at this point…

Ultimately, I removed the gloves and scratched King’s head with a little more reassurance. He was loving it, and as he glanced ove

r at the other cats (who knew to keep their distance from him), I could tell he was pleased to monopolize my attention.  I packed up and prepared to leave. I walked over to where I had laid the gloves, but he beat me to them, and promptly took a seat. Well then! I lingered awkwardly and asked him if I could have my gloves back, but he simply gazed off into the distance, either with wisdom or disdain – most likely the latter. I left him with the gloves (of course) and as I looked back one more time, I saw that he had curled up on top of them, looking very comfortable and pleased indeed. I like to think they will be a reminder of my visit, and I take it as a sign that he kinda liked me…

All in all, I felt better after my visit with King Cat and his subjects. I still think he is dying, but I am less distraught knowing that he is still mobile, dominant, and nearing the end as part of a natural aging process. I wish I could do more, but I think I will at least visit him every now and again, with extra tuna fish in tow. Besides – I want to see Mama Cat’s kittens when they arrive 🙂

And now… take a look at these two stunners! I might have to catnap these little guys, because they are so stinkin’ cute. 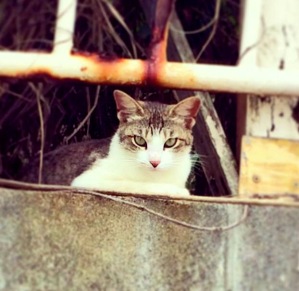 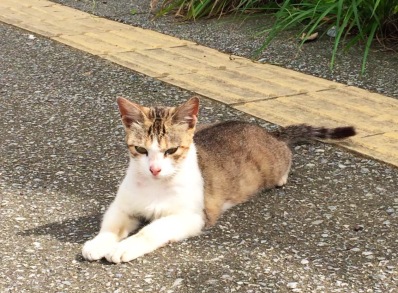 One thought on “My Crazy Cat Lady Adventure”