Chuck and I experienced our first typhoon this week!

Typhoon Neoguri (neoguri means “raccoon”, by the way) came with a lot of hype and it certainly delivered, albeit not to the extreme that was originally predicted. Sunday we stocked up on supplies, Monday we went to work, and by Monday night/early Tuesday morning, we were officially under Neoguri’s attack – continually receiving the well-intended but decidedly unhelpful emergency alerts to our phones like the one below: 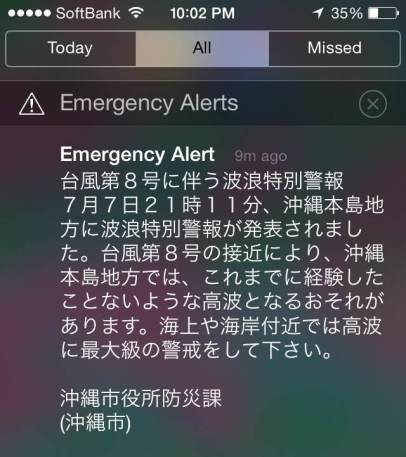 Our particular corner of the apartment building was mostly sheltered, so the wind and rain didn’t seem all that bad at first. Getting quite antsy, I decided to go out in it… twice! I captured some great video footage of Chuck braving the powerful winds. The chaos at the end is me getting tumbled around. I almost hit a wall, but managed to stop myself just in time. I blame my slippery flip flops… Kids, don’t try this one at home!

Here is a selfie of me before venturing into the typhoon, and one after. Wearing glasses and a bun in my hair were not the smartest moves! It was truly exhilarating, though, and definitely more powerful than we realized, once we left the concrete shelter of our apartment building… 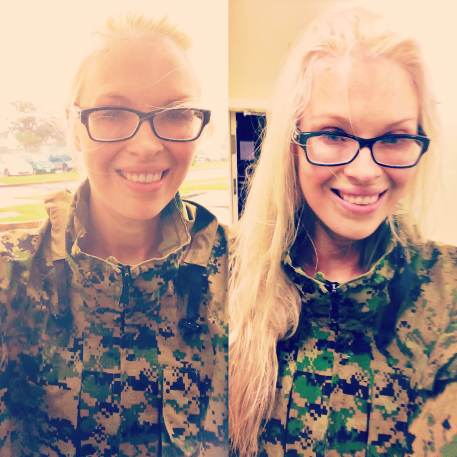 We lost electricity after the storm actually peaked. I was in the middle of cooking Italian sausage spaghetti, which was a crying shame, because of course I had to dispose of the sausages in the end. We resorted to sandwiches, wine, and Cards Against Humanity by candlelight with some equally bored neighbors. The night was warm and sticky without a working AC and dehumidifier. The wind continued to howl and the rain poured with more monsoon-like fury than before. We didn’t get power back until the next afternoon.

Luckily, our particular area in Okinawa is on high ground, so our neighborhood suffered very little damage. Other areas, however, were not so fortunate. Cars were overturned, trees were down, and flooding was rampant.

Next time, I’m taking a page out of the Locals’ book. For everyone who thought I was crazy for going on in the typhoon in Chuck’s camo rain jacket, check out these Okinawans who ventured out for foot races… stark naked! 🙂 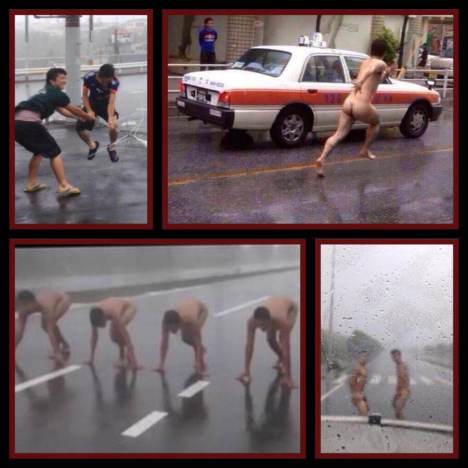 One thought on “Typhoon Neoguri Pays Oki a Visit”