While in Iwakuni on business this week, I decided to venture to Hiroshima… school work be damned. What was it Mark Twain said? Never let school interfere with your education. Yep. That’s right. Thanks, Mr. Twain!

I admit I was daunted by the prospect of making the 90 minute round-trip alone. I know like 3 words in Japanese, and I am directionally challenged to begin with. Navigating the unknown really stresses me out, and my biggest fear when traveling alone is getting on the wrong train or bus and ending up stranded somewhere random. But I wasn’t about to let my fear prevent me from seeing such a major historical site, so I stepped out with gusto. I was by no means graceful about it though. I awkwardly stopped several Japanese businessmen to double and triple check that I was, in fact, on the correct train to Hiroshima, but somehow I made it. My iPhone battery was exhausted from extensive research and mapping, but I made it.

Supposedly, the Memorial Peace Park is a 25-minute walk from JR Hiroshima Station. I was in no mood to fluster myself further, so I opted to pay for a taxi instead. To my chagrin, the driver seemed to have no idea where to go, despite enthusiastically recognizing “Peace Park” and my highly uncomfortable bomb-like gestures. I opened Google Maps on my phone and helped the poor guy navigate to my destination. We made it with an 8% battery charge to spare.

Peace Park itself is lovely and random, nestled in the midst of an otherwise modern, industrial, and bustling city. The Japanese determined never to build up the area surrounding the hypocenter of the bomb, dedicating it to memorials, monuments, and museums. The most poignant structure for me by far was the A-Bomb Dome, the skeletal remains of the former Industrial Promotion Hall. It was the building closest to the hypocenter that remained at least partially standing. The interior was completely blown out and everyone inside died instantly. It was left as-is to honor the memory of the casualties on August 6, 1945. It is also a UNESCO World Heritage Site.

Something about an original structure, inside of which people were literally incinerated alive, really got to me. It was haunting.

To my surprise, the rest of the Park did not affect me the way I thought it would. That bothers me a bit. I felt rather nervous on the train, and I was close to tears several times just thinking about it. I was unsure how I would feel as a lone American (and a member of the Armed Forces family) walking around this particular site of death and destruction. I was sure I’d feel like a giant asshole, especially after reading that many of the hibakusha – the surviving victims of the atomic bombs in Japan – still lived in Hiroshima with their families and visit the sites themselves.

Perhaps it’s because monuments, while beautiful, don’t truly capture the reality of the horror. That could be why the A-Bomb Dome was so powerful. It felt so real. I think it also helped that I was by no means the only Westerner. I couldn’t tell if I was the only American (I heard a lot of French voices, in fact), but I felt less alone in that sense than I thought I would.

Most surprisingly, I left the museum (which cost less than fifty cents to enter) without shedding a tear. I’ve been trying to figure out why? It was certainly somber. Perhaps it’s because I’m used to the extensive and powerful Smithsonian museums in DC, and nothing will ever compare to the Holocaust Museum (for instance.) Maybe it’s because it was so scientific. There were definitely horrific images of injured people – but they were almost like what you would see in a medical journal. The displays generally lacked emotion. I mean, seeing an actual preserved tongue with blisters on it is disturbing. Observing actual remnants of keloids (burned, scarred skin) is troubling. But it’s detached and removed from the person. Of course, maybe it was because explanations and testimonies were lost in translation. Maybe it was because I prepared myself so adequately during the trip over. I’m not sure. I’m still thinking about it, whatever it was. It was by no means a happy excursion, but it didn’t completely ruin my day as expected.

That said, I have heard the museum in Nagasaki is much better, and truly captures the impact of the bomb and the human implications of it. I will surely visit Nagasaki someday. 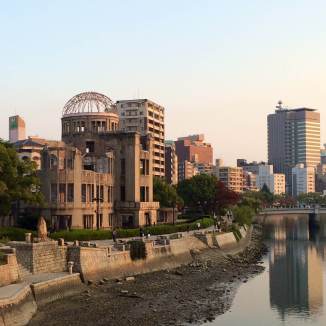 The A-Bomb Dome rising amidst modern and urban Hiroshima 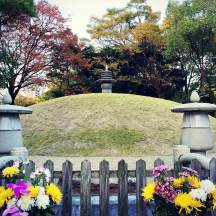 Atomic Bomb Memorial Mound, under which the ashes of 70,000 unidentified victims are buried. Supposedly the hypocenter of the explosion.

Memorial Cenotaph. You can see the A-Bomb Dome and the Peace Flame through it. 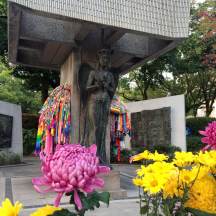 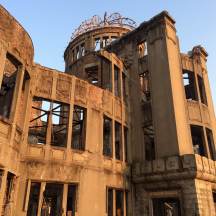 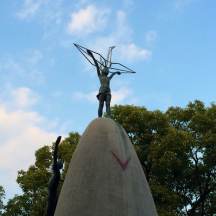 Children’s Peace Monument, with little Sadako Sasaki on top (the girl who died from radiation after folding 1,000 paper cranes believing in the belief it would cure her)

I concluded my pilgrimage with a delightful meal at an Italian inspired café on the river that runs through Peace Park, called Café Ponte. I had a delicious fresh-squeezed cassis orange with a small dish of Japanese beef teriyaki and grilled veggies. I wish I had pictures – because both the meal and the café were quite photogenic – but the photos I took of the Peace Park monuments effectively killed my poor iPhone’s battery. But, I did find a small image of the café from the internet to give you an idea 🙂 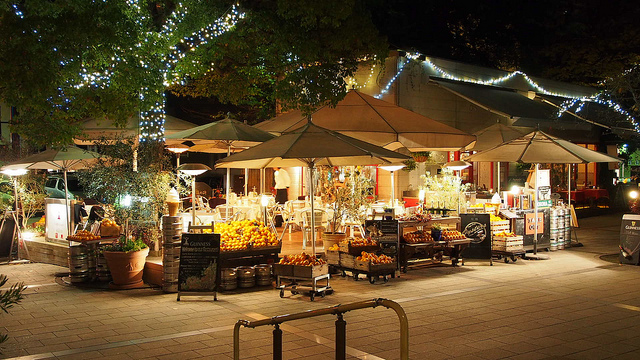 Aside from being ignored by several taxi drivers (even taxis at rest!), my trip back to my hotel in Iwakuni was uneventful. I even got home in time to get some school work done.

4 thoughts on “Pilgrimage to Hiroshima”