It’s hard to believe that Chuck and I will hit our 2-year mark in Okinawa in just a couple of weeks.  One year left sounds like both a lot of time, and no time at all. Much has been done, and yet there is still so much to do!

I didn’t mean for this blog to turn into a travelogue, in which I only update when I go somewhere exciting. Even if no one ever reads it, I want to look back on it myself and remember all the adventures I had, big and small. So, here’s a quick re-cap of what we’ve been up to since our Thai Holiday, in reverse chronological order.

Just yesterday, I drove 1.5 hours north to join my friends in celebrating Hannah’s birthday in a cabin on Okuma Beach (Chuck is away for work.) We had visited the site when we first moved here almost two years ago, after hiking Hiji Falls. It was just as strikingly beautiful as before, and I am ashamed that I waited two years to return. Unfortunately, it was too cold and windy to swim, but it didn’t stop us from bundling up and watching the sun go down. 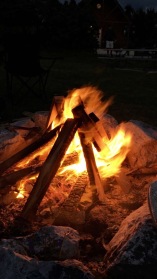 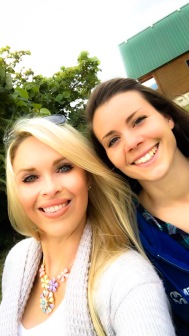 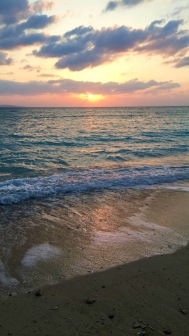 We built a bonfire after the sunset and then ventured over to the lounge for some dancing. ‘Twas a lovely evening 🙂

2. The end of an era: Soupcon says goodbye

One of the first cafes I discovered upon moving here was Soupcon, an adorable beach side restaurant that served Western food with Okinawan flair. I introduced two of my dearest Oki friends to it, and we frequented the spot for coffee, lunch, and dinner on numerous occasions. Last month, I learned by lucky accident that it was closing at the end of the week – for good. The sweet owners, Mayumi and Kento, were packing up and heading to mainland. With dismay, I quickly arranged for a final lunch and dinner with the groups of friends  I had come to enjoy dining with there.

I will surely miss Soupcon’s savory Camembert fondue (always with extra bread!), the mussels drenched in butter and wine sauce, the artistic Peace Latte, the succulent apple pie, and the light n’ fresh Kitty (wine and ginger ale with lime), which Mayumi always assumed I would order even if I secretly wanted to try something else. 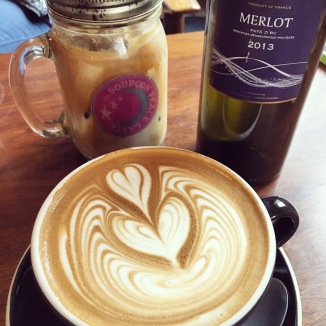 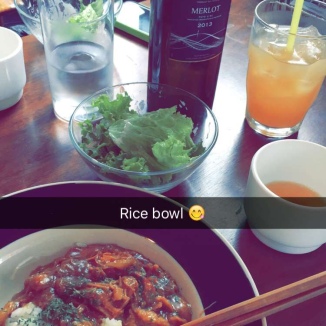 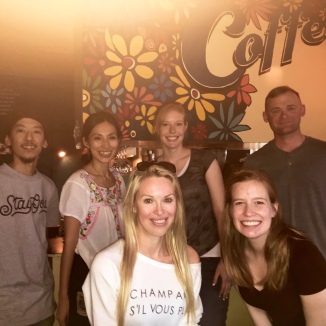 Posing with Kento and Mayumi (back left)

However, it must be noted that with sad endings come new beginnings. My final Soupcon lunch with Alex was on closing day itself, and we met a lovely local named Sonoe who spoke French, English, and Japanese (of course.) Alex and I are huge Francophiles and were delighted to meet her. We spent 3 hours chatting at Soupcon, in three different languages.

We ended up meeting with her again the following week at another cafe across the street from Soupcon, a charming little curry spot I hadn’t visited in ages called Ruriiros. We plan on meeting regularly, to practice our language skills and develop a stronger friendship 🙂 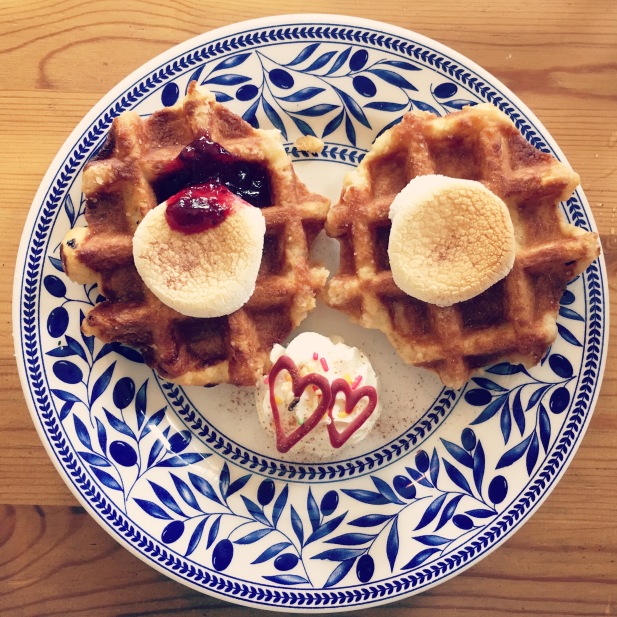 The lightest and most delicious cinnamon waffles at Ruriiros

3. Chuck’s birthday at the Ritz-Carlton

It’s no secret that Chuck and I are partial to nice hotels. Normally, I’m happy with a unique boutique hotel, like the Hotel Eclat in Taipei, the Namton in Chiang Mai, or the Hotel Mondial in Paris (which we found rather by accident.) But we first experienced the Ritz in Atlanta after learning of the steep military discounts, and of course we loved it. We had speculated about the Ritz in Nago, on the north side of Okinawa, but alas – no military discount here!

The grounds/view at the Ritz Carlton

But when Chuck’s birthday arrived in mid-February – and since I always struggle finding something to get him – I decided to splurge and surprise him with a room for the night and dinner with friends at its highly rated restaurant, Gusuku (the “cheap” one, of three.) We combined it with a viewing of the cherry blossoms on Mount Yaedake, and had a wonderful stay. It worked great as a Valentine’s Day celebration, as well!

The blossoms were just okay this year (we’ve had an unusually chill winter), but the hotel did not disappoint!

Enjoying a crisp beverage at the Ritz

The boys posing on our balcony at the Ritz 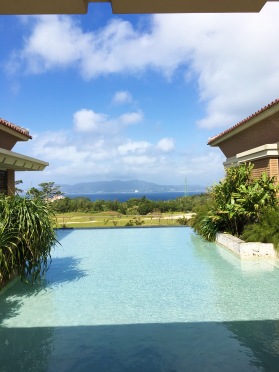 January was a rough month for OkiPaws. Four cats that we tried to save were ultimately lost. It didn’t help that I was short staffed at work, taking a particularly challenging class for my master’s, missing Chuck (who was away the entire month), and suffering through the coldest January with no heat in the apartment. I barely had time to do what I love most when it comes to the Oki kitties – visiting Uken beach and spoiling my sweet strays with tuna fish.

With February and March came some relief: a new class, Chuck’s arrival home, (slightly) more sunshine, a new employee to help out at work, and time to visit Uken! I was even able to find homes for a few fosters, some of which had taken a little longer than expected. Things are looking up, and my Uken babies give me such joy! 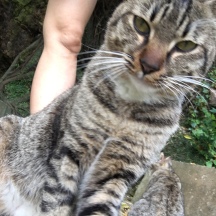 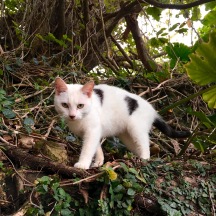 So many birthdays!  🙂 Mackenzie celebrated in truly Okinawan fashion – with delicious sushi at one of our favorite joints, Sushi Zen, and a night of dancing at the notorious Gate 2 Corridor outside of Kadena Air Base. None of us had been before, but it lived up to everything we had heard:  very young servicemembers (we were the oldest in the bars by far!) and plentiful evidence of debauchery (on their part, as we managed to avoid trouble.)

Nonetheless, a great time was had by all as we tore up the dance floor. I was designated driver for the night, which didn’t bother me at all because I have developed an intolerance to alcohol again (something similar happened when I lived in North Carolina.) Maybe I’m just getting old, but drinking makes me feel like poo. I have to listen to my body and respond based on what it tells me after the first drink – if it feels good, I can keep going, but if it feels not so good, I just stop. More and more, it’s the latter. In the meantime, I’ve discovered Jolt caffeine gum, which keeps me from getting too sleepy while the younguns rage! 🙂 Highly recommend it.

Anyways, what this means is that these days, my favorite part of any evening (besides the company) is the food. Always the food.

The Yellow Roll at Sushi Zen