As Chuck and I approached our third Christmas away from the U.S., we realized – with a smattering of guilt – that we had not gone home for a single one of them. Of course, we had made it home on other occasions, and family is always welcome to join our international excursions, but this time we made it a point to invite Chuck’s parents and siblings to join us for a road trip in New Zealand.

New Zealand is unlike any country I’ve visited in that it’s mostly nature/outdoors activity and is not conveniently interconnected by public transportation. It was quickly apparent that the only way to really see it was to road trip. I swapped ideas with my brother-in-law as we formed a basic itinerary, and agreed to rent an adorable, bright green and purple, 10-seat Jucy cruiser van. It ended up the perfect little Jedlicka adventure-mobile. 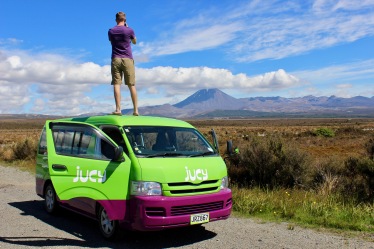 Our plan was to fly into Auckland and spend a few days exploring the North Island. We would then take the ferry out of Wellington to the South Island, where we would spend the remainder (and majority) of our time, since it is known as the more strikingly beautiful of the two. Definitely take that comparison with a grain of salt though, because the North Island was stunning, as well!

Our first stop was Hobbiton. I know it’s a total tourist trap, but I simply couldn’t skip it. It wasn’t even as gimmicky as I thought it would be. We had a great time exploring the Shire, hearing insider anecdotes about the filming itself, and drinking a pint at the Green Dragon. My sister is a total Lord of the Rings nerd, so I took the time to browse some treasures for her in the gift shop. Even if you aren’t a LOTR fan, the set is great fun and nestled in a lovely part of the North Island.

We made our way towards our Christmas Eve and Christmas Day destination – a lovely lake town called Taupo. I deliberately avoided making plans for Taupo, because I wanted us to rest up, catch up, and enjoy the holiday. We rented a cute little home via AirBnB, and did surprisingly well with no TV!

We enjoyed a Christmas Eve dinner at The Brantry, which holds the #1 spot for Taupo restaurants on TripAdvisor. It wasn’t bad, but it wasn’t #1 material, either. We are all rather spoiled when it comes to food, especially if it comes at a higher price. Nonetheless, it was lovely to eat, drink, and be merry as we celebrated the holiday in a more unconventional manner, in an unconventional place. We savored a very good – but even more overpriced – Christmas Day meal at Bistro Lago, which was one of just a couple of restaurants open that day. We made memories back at the house opening a handful of gifts (mostly designed for laughs),  and snapped family photos for the first time in about 3 years.

We only made one local excursion in Taupo, to see the stunning Huka Falls. It was a short and easy hike, and the Waikato River left me spellbound. Of course, I didn’t realize at the time that I’d seen nothin’ yet!

The name Huka is the Maori word for ‘foam’. Makes perfect sense here

The day after Christmas, we were on the road again…

The key bucket list items on the North Island were checked – the Hobbiton movie set and a quaint Christmas at Lake Taupo – so the next day-and-a-half was spent heading south towards Wellington. Along the way those first four days, we stopped at Rotorua, Cambridge, the LOTR movie “set” of Rivendell, and Tongariro National Park’s Mount Ruapehu and Mount Ngauruhoe (otherwise known as Moun Doom from LOTR). The scenery was beautiful, as there were many pastures, mountains, and fluffy sheep to view along the way.

We arrived in Wellington primarily to eat dinner and spend the night, which was good because it is a quiet little town! Granted, it was Christmas time, but I was surprised at how empty it was. We got a good night’s sleep at the Bolton Hotel, and woke up early to catch our ferry to the South Island… 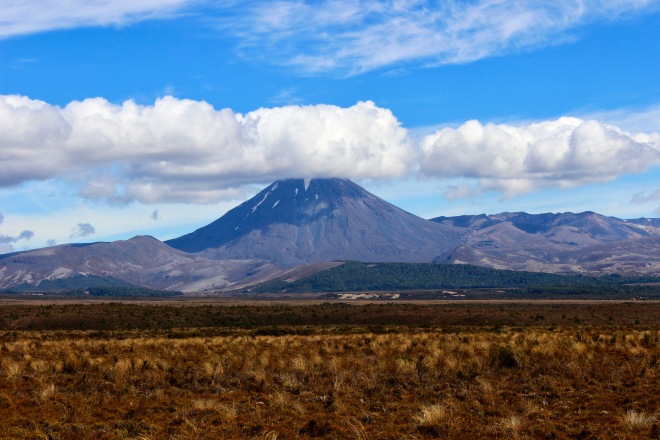