Growing up, anything that remotely resembled fortune-telling, consulting with spiritual mediums, or manipulating one’s fate basically meant dooming yourself to demon possession and/or Hell itself. I believe we called it “opening the door to the occult.” Biblical examples of swift and sudden punishment or death were referenced to show how uniquely dangerous this sort of activity was. Movies like The Excorcist further demonstrated the unfortunate consequences of dabbling in the occult, however innocent the individual or her intent. So naturally – even though my early Christian beliefs have moderated over the years – I viewed even the most mundane activities of this nature with suspicion and a bit of fear.

I was not aware of anyone in my life who actually participated in “the occult,” aside from girl friends who only half-seriously checked their horoscopes in the back of the latest Cosmopolitan magazine. Even something as inane as magazine horoscopes made me uncomfortable for a while, but when I finally read mine out of curiosity, I simply rolled my eyes. They may not be the gateway to hell, but they sure as heck were silly. 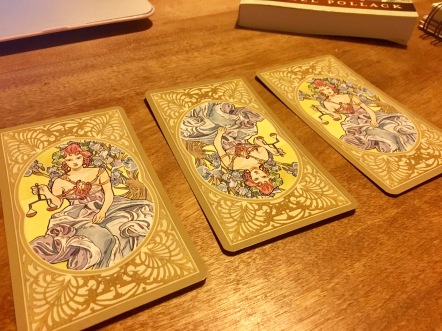 I developed a friendship with a girl here in Okinawa who is markedly more spiritual and in touch with God than I am, even if I am more traditionally Christian. She revealed to me that she uses tarot cards as a way to connect to God and her inner self – her own intuition. Intrigued, I confessed my misgivings to her, which she heard without judgement. She admitted they weren’t for everyone, but by no means did they serve to communicate with spirits any more than a simple prayer would. They are not meant to predict the future, she said, but to encourage you to think about your situation and perhaps view it with fresh perspective.

Eventually, I agreed to let her do a tarot reading for me.

Aside from the lighting of candles and cleansing-of-the-spirit-type of preparation (which consisted of nothing more than a Christian prayer and focus on positive energy), it was remarkably straightforward. I drew my cards and they were honestly more psychological in nature than spiritual. I didn’t feel like any demons (or angels, for that matter) were present, or that my friend (or the cards) was attempting to summon them. It was really more about self-reflection… the goddess of inner self, if you will.

The religion or spirituality of self isn’t something I’ve fully grasped just yet, but one of my New Year Resolution’s was to explore religion and spirituality more in general – to include alternative spiritualities. For instance, I want to re-read the Bible, as well as parts of the Koran and the Bhagavad-Gita. I’m writing down titles of books on religion and spirituality that I want to read, especially concerning where they may intersect – demonstrating more commonality than opposition. The world needs more of a focus on commonality these days…

… With this in mind while shopping in London this past December, I stumbled upon a cozy astrology shop in Covent Garden. I wandered among the crystals, amulets, and dreamcatchers before purchasing two sets of tarot cards (one for me and one for my friend), two sets of oracle cards, a charming book called Rumi’s Little Book of Love and Laughter, and a mini-calendar entitled Zen Cats (of course.) I noted with interest that the shop was filled with items and imagery relating to the mystical aspects of all religions, to include Judaism and Christianity. Mostly, I noticed that everything was very positive in nature, striving to create balance, harmony, and healing for anyone in search of it.

At one point, a customer’s child asked his mother quizzically, and with a bit of sass: “So you’re saying that crystals can heal you? That doesn’t make ANY sense.” Everyone in the shop erupted in laughter. Despite my desire to delve further into the spiritual realm, I appreciated this innocent reminder to keep my feet solidly on the ground 🙂 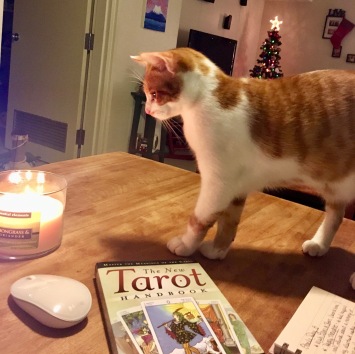 Tetsu, one of my “familiars” (haha!) checking out my candle during my practice.

That said, I approached my exploration of tarot with a healthy mix of positivity, research, and nerves. I didn’t want to take the cards too seriously and get stressed about doing them “right”, but I also didn’t want to dismiss them and fail to connect with them, inhibiting their purpose altogether. So far, my readings are “practice” sessions. I familiarize myself with the meanings of the cards while a white lemongrass candle flickers and my Earth Spirit playlist hums. It’s really all quite interesting, especially considering the origins of tarot are literally just an old European card game, tracing the journey of the human Fool through life’s various, universal stages.  I quite like it.

Using BiddyTarot.com and Rachel Pollack’s The New Tarot Handbook as analytical guides, my notebook with the black kitty on it (that reminds me of one of my favorite fosters) as a journal, and my own two cats as my adorable “familiars” (sorry, can’t resist a witch joke!!), I explore the meanings of 3 cards a few times per week. Sometimes, the cards don’t apply to me much at all. Other times, it’s incredible how dead-on they are. 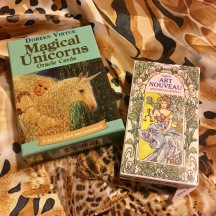 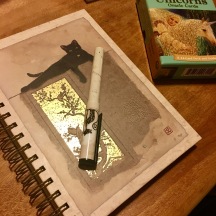 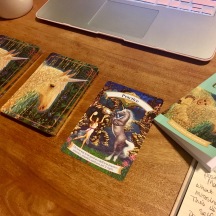 An oracle reading, aptly telling me to “Practice”

Ultimately, my goal is to learn and to encourage introspection. And so far, I am enjoying the journey!

One thought on “Tapping Into Tarot”