Goodbyes are never easy. It’s an old cliché, but we all know it’s true. My Okinawa goodbyes were not particularly graceful or memorable. They were actually rather abrupt, but in some ways, I like that better. As my friend Sally said, it’s like ripping off a BandAid. Or diving head first into cold water. You’ve just gotta do it. And in the end, most of my goodbyes were not that serious, because I know I will see many of these people again. But there was one goodbye that was harder for me. Because I know I will never see my Uken family again. 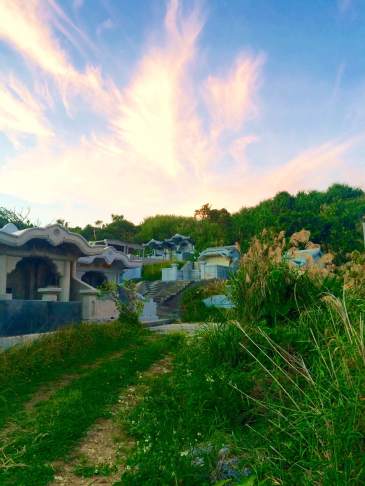 It’s hard to explain what Uken Beach means to me. On the surface, it may seem obvious: I like cats. Cats are my spirit animal. And believe it or not, I haven’t always been as obsessed as I am today. Sure, I’ve always loved them, but it wasn’t until my mother got rid of my cat while I was in college (without my knowledge) that I truly realized their significance in my life. As my mom struggled with mental illness and my home life disintegrated, Sammy was my consistent source of comfort. When I didn’t have her anymore, I felt her absence on a very deep level, and from then on would obsess over when I could finally get another feline companion of my own.

So naturally, Uken was a paradise for me. I just loved getting to know each of the 20 or so stray cats that called the Japanese tombs on the beach “home.” I became familiar with their unique personalities, and able to distinguish each meow. As the new girl in a new country who was still waiting on a new job and new friends, the Uken cats were my only companions. They remained among my truest. 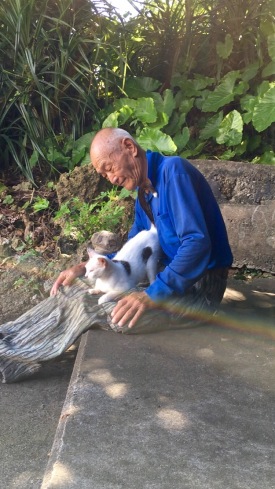 I also loved how my ventures to Uken allowed me to acquaint myself – however awkwardly – with locals. Like Old Man Masao. I swear, he had to have been about a hundred years old. Until recently, he walked to Uken twice per day, rain or shine, carrying a bag of scraps and wearing his usual worn out khakis, bright blue shirt, and baseball cap.  He spent hours in the early morning and then hours in the late afternoon with the cats. They trusted him more than they trusted me. He would kiss them. Wipe goo out of their eyes.  He would energetically gesticulate his observations of their experiences to me, rambling in Japanese, despite the fact that I knew approximately five words of it.

Daijobu. I played along, smiled, and teased him in English.

I didn’t see Masao during my last couple of months in Oki, but there were signs of him. I would climb to the hidden shrine above the ground level tombs (his favorite spot) just to make sure his little cans of kitty food and water were still placed discretely near the cave. I tried not to fear the worst when he wouldn’t show up, but I think he just had to cut back on the frequency of his trips, due to age and Oki heat.

Then there was the Jeep Couple. They would park their blue Jeep near the dilapidated tin hut for a couple of hours late in the afternoon, leaving water for the cats and just generally keeping an eye on things. They seemed well-intentioned, but I actually disliked them at first. They were always frantically trying to tell me not to leave food for the cats. Skoshi, skoshi, they’d say emphatically. I had no idea what they were talking about and I resented them for keeping these babies hungry.  It wasn’t until a crisis arose with the manager of Uken Beach, who wanted to exterminate all the cats, that I realized the Jeep Couple was just trying to protect them. Skoshi. Just leave a little bit of food. That way we don’t leave a mess and anger the handful of locals who resent the cats. It all made sense! I started leaving smaller piles of food, and with the support of friends and a few locals, successfully convinced the town of Uruma that our trap, neuter, and release (TNR) efforts were controlling the population and there was no need to kill them.

From then on, the Jeep Couple waved cheerfully at me when I pulled up in my pink car, flashing big grins that are actually quite uncharacteristic of older locals. I loved our newfound understanding and camaraderie.

They learned to recognize my car and swarm me as soon as I stepped out. They’d always hang out after the food, for love 🙂

But I haven’t gotten to the deeper reason for my practically spiritual attachment to Uken Beach, and the cats that reside there.

My life has not been without challenges and loss, but one thing I have been fortunate enough to mostly avoid is suffering, decay, and death. I realize that this will not always be the case. I will confront it directly sooner or later.  And while I certainly know people who have passed away, death has never touched my life as intimately as it has touched many others. Additionally, I have never found the right opportunity to serve those in need, and I do think that this disconnect has negatively affected my capacity for empathy.

That said, I have made attempts to connect with those less fortunate than me on a variety of service projects through school or through my employer, but they were all extraordinarily sanitized. Helping disabled children at the horseback riding camp? I mucked stalls. Never interacted with a disabled child. Supporting meal delivery for low income individuals suffering from HIV/AIDS? I donned a hair net and packaged meals, assembly line style. I never met a victim of HIV/AIDS.

But Uken connected me with not only friendship and joy, but also with suffering, decay, and death – the proverbial circle of life. Beyond merely bearing witness, I confronted suffering that I could actually do something about. I could make that circle at least a little less painful. On many occasions, little furry lives were quite literally in my hands. The lives of my friends were in my hands.

There were many success stories. Many happy endings. There were also a lot of failures, whether because the situation was so dire that my best wasn’t good enough, or because of hard choices I had to make – decisions over which I will always agonize. Every time something really bad happened, I wanted to quit. But I would keep going back. Even though I knew I couldn’t save them all, Uken had a way of drawing me back.

Masao cradling Jacob. His siblings were in rough shape… too graphic to post here. 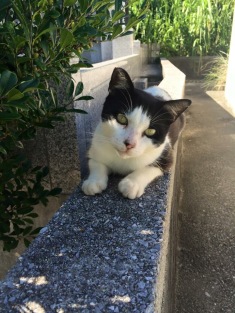 The day I was supposed to say goodbye to my Uken cats – a day over which I had cried more than once in anticipation – it straight poured outside. It’s unusual to have constant rain in Okinawa without breaks, but this deluge was relentless. I was mildly frantic, since Chuck and I only had one borrowed car to share and I wasn’t sure how I would get back up there while in temporary housing 40 minutes away, with all we still had left to do. 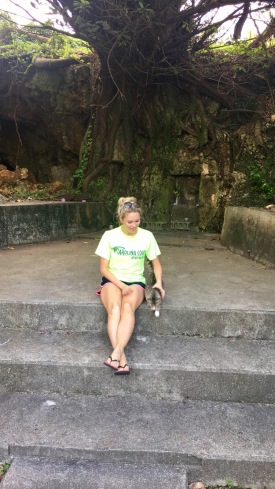 Luckily, Chuck ended up having to go back to the area for some final checkout responsibilities, so he took me with him and dropped me off at Uken. I brought my kitty fam a smorgasbord of tuna and canned food. I had some time alone with them before Chuck showed up again, and we spent nearly another hour there together. At first, I wished I could be alone with them the whole time, but it’s probably good that Chuck came. If he hadn’t, I likely wouldn’t have left till after dark, ridiculously emotional. Chuck took my hand and the tears started flowing as I cast my final glances at Simon, Evie, Shadow, Sylvia, Watson…

They gazed back at me quizzically. Some chirped for one more final chin scratch. I like to think that they knew.

In the end, my goodbye felt awkward and my work incomplete, but I read a quote from a great book shortly thereafter that made me fuss less over it.

“My soul has learned what it came to learn, and all the other things are just things. We can’t have everything we want. Sometimes, we simply have to believe.”

It’s from Garth Stein’s The Art of Racing in the Rain, which is a statement on human nature from the perspective of a dog named Enzo. Enzo is about to die, and he is initially regretful about all that he didn’t get to do with or for his human. He frets about what he could have done better. But with this simple observation, he leaves this world for the next in tranquility and peace.

I know I won’t see my Uken friends again, and I won’t know what will become of them over the years. But I learned, and I loved, and I grieved, and I grew. And like Enzo says, I must keep believing in this very special little spot by the beach ❤ 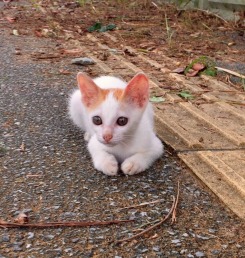 I adopted my sweet Mom from Uken in July 2014 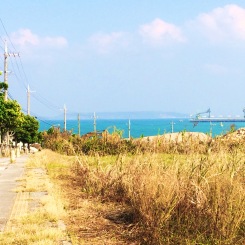 Approaching the Tombs at Uken Beach

My boyfriend Linus and Pamplemousse (rescued and in a forever home!) Linus always watched out for the little ones. 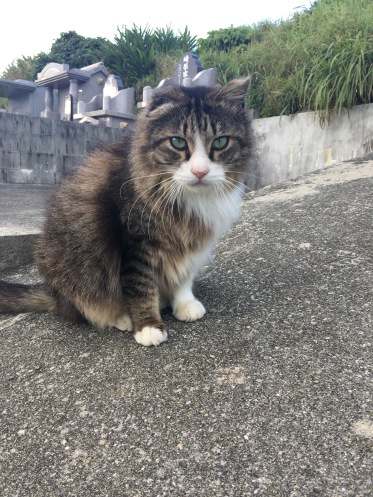 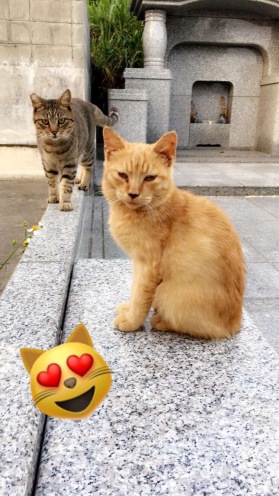 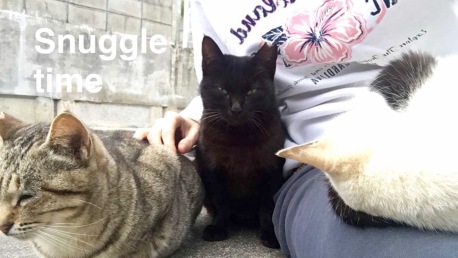 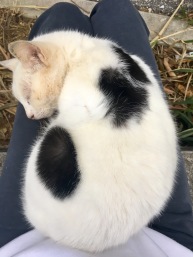 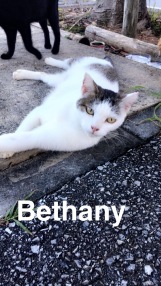 One of my originals 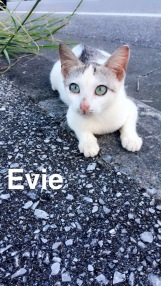 Originally named Dottie because I thought he was a she… oops.

This is actually Shadow, lol

Feisty Grizz. Always rubbing on me but won’t let me pet her.

And this is actually Storm. I worry about her 😦 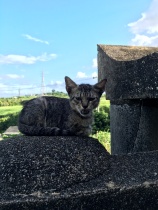 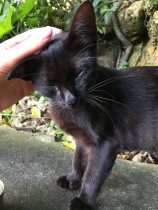 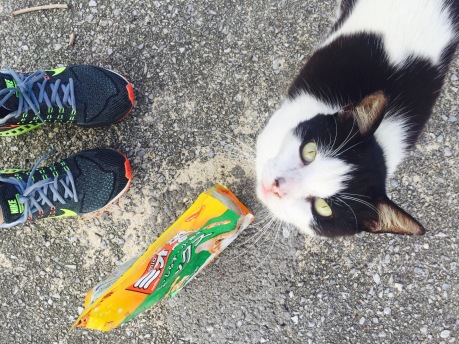 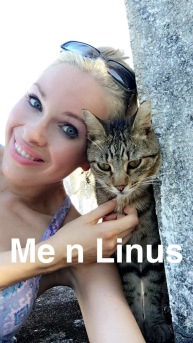 2 thoughts on “My Favorite Little Corner of the World”