Tetsu didn’t merely wander into my life. He stormed into it like the impetuous Okinawan typhoon of steel for which he was named, full of spunk and tenacity. Although it seemed like he’d been in my life forever, my Boy Named Su was only with me a little under two years… And I still can’t believe that he’s gone.

I’m generally against letting cats outside. While I recognize the closer tie to their wild ancestry than dogs, there are simply too many dangers. Of course, I have mostly lived in urban apartments in high traffic, high risk areas. In Okinawa particularly, there were too many diseased strays, plus the chance of being picked up by Japanese animal control and sent to the gas chambers. There was also plenty of traffic…

But our little Pink House in Southern California has been something special. It has this magic to it. It tantalizes with its ephermal Ferngully distractions. It’s quiet. Nothing bad ever happens here. And I got comfy.

Momo and Tetsu were something special, too. Adopted as strays, and perhaps somewhat closer to their wild roots than your average housecat, they longed for the outdoors. It felt like a special kind of mean to lock them up, in a relatively safe and relaxing place like this.

And Tetsu, especially, was always a daredevil.

I have really struggled with this. It feels so different from when Annie passed away. She was older and had lived a long and full life. Tetsu was still a baby, and so full of energy and all the potential that comes with youth.  I can’t bear that he was hurt on my watch. That he tried to come home to me, and I wasn’t there. That he left this life alone, so suddenly, and hurting. I will never live this down. I miss him so much.

Mornings and evenings are the hardest. In the morning, he would always scramble for my attention. Chirps. Moans. Meows. Paw-in-face. Pouncing in the curtains. He’d rub on my legs and nearly trip me as I made my way to the bathroom. He’d do his baby meow while I used the potty, and rushed to the faucet to lick the dripping water after I washed my hands. He loved his wet food, and if I was home for the day, I would open the back door and he would dash with utmost enthusiasm down the stairs and into the yard. A beloved routine that would, in the end, kill him.

In the evening, he would usually flop on Momo and nap until I started watching Big Bang Theory from 7-8. At some point during that hour, he would rouse himself and trot to greet me on the couch, with cute little meows. He would snuggle up in our favorite blanket and start suckling it, making biscuits with his big, awkward paws. Then he would snooze again until Big Bang Theory was over, and we made our way to bed – warm and happy.

But on the morning of May 26th, some time between my backyard yoga session and warmed over curry lunch, a car hit Tetsu, and left a gaping hole in my heart.

Typically, Su would come check on me every hour or two, so after noticing he hadn’t shown up in a while, I went looking for him. It was broad daylight on a quiet Saturday, so I wasn’t alarmed. I checked all his favorite places in the yard and the perimeter (because he hardly ever wandered away from the property), but ultimately found him face down beneath the bougainvillea bush where the back yard borders the front. He was very obviously… dead. There were no signs of illness or injury – and the eventual news that it was a car accident hit later, after the necropsy… and it hit me hard. Very hard.

I just can’t believe he’s gone. I am grateful that I found him at home. Many cats disappear and their families never see them again. I’m grateful that he didn’t waste away from some long lasting sickness. Tetsu’s death, while sudden and traumatic from internal injuries, was fairly quick, in the scheme of things… 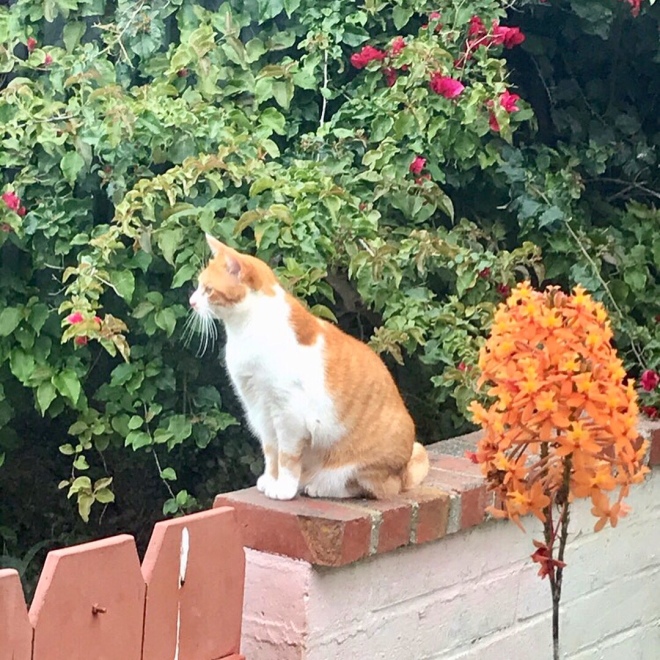 But still. I am just so very… sad. And guilty. I can’t do my yoga or enjoy the sunshine or watch Big Bang Theory without feeling his absence on a very profound level. We were supposed to have so many more years together. He was supposed to have more time watching birds in the orange grove, pouncing among the succulents, and nuzzling my warm fuzzy blanket. He was supposed to grow old being my little Sour Patch Kid, always. I was supposed to protect him, and his death was entirely preventable.

I made decisions based on his personality and happiness and an overall risk assessment, but God – Nature – Fate – whatever powers that be, had other plans. I could have done things differently, and maybe he wouldn’t have been the same kitty had I locked him up – I don’t know. But at the end of the day, he’s gone and there’s nothing I can do about that now. I will never forget him, just like I will never forget Annie before him. Or Sammy. Or Sam. Or Lacey.

My sadness and guilt are subsiding. I am learning to embrace his life, rather than his death. It’s been hard with Chuckles away, but Momo and I will get by. I hug my Peach a little closer every day, and thank God that Su got home. There still so much love to give ❤ 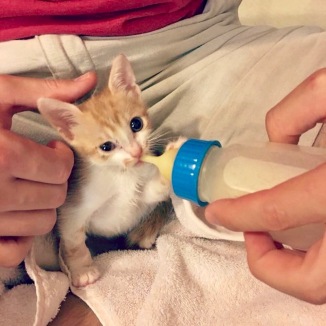 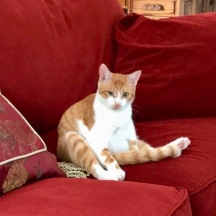 2 thoughts on “The Storm Beneath the Bougainvillea”