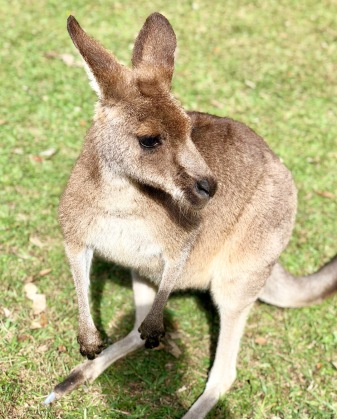 were to exotic Afghanistan, and no family leave was permitted. His third deployment is to Australia, and although his situation is vastly different (safer) than prior deployments, I still didn’t anticipate that he would have a leave block.

But he did indeed receive two weeks of leave halfway through the six-months assignment, and after much time/money/energy-based indecision, I booked a flight to go visit him. I’m so glad I did!

I will admit that – while I had a great time – Australia is not one of the more interesting or memorable places that I have visited. Granted, I only spent about a week in Queensland, splitting our time between Brisbane and Cairns – both of which resemble California in culture, climate, and geography. The food was nothing to brag about, and the landscapes mirrored SoCal in just about every way. That said, the wildlife is like none other, and the kangaroos were my favorite part of the whole trip (besides spending time with my Chuckles, of course!) 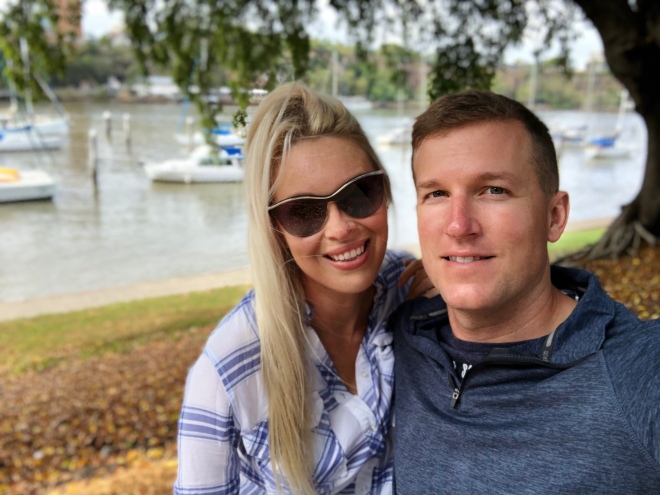 We spent the first few days in Brisbane, at the Ovolo Inchcolm Hotel (I love me a boutique hotel!) I had wrestled with whether to fly into Brisbane or Sydney, especially once I discovered that the costs and flight times were overall the same. Sydney seemed like much more a hustle – a London or New York. According to my research, Brisbane offered a more laid back culture, blending modern and historic and hipster in a way that  better suited Chuck and me. Of course, I haven’t been to Sydney, so I can’t know for sure – but I think we made the right choice.

Every time we travel, I am surprised at how efficiently Chuck and I can explore and absorb a city. We did a lot of walking the first day, strolling through the Botanical Gardens, South Bank, and the Central Business District. I enjoyed observing Brisbane’s own pigeon-equivalent, the white ibis, and the elusive yet noisy kookaburra (which later inspired Chuck’s latest and greatest nickname, Chuckaburra!) 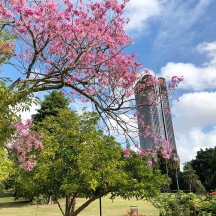 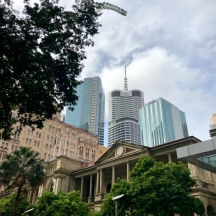 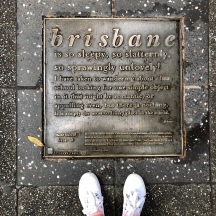 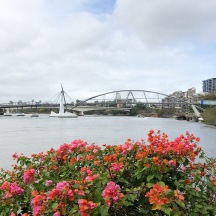 On the second day, we rented a car and drove to the Australia Zoo – Steve Irwin’s own! Those who know me understand my mixed feelings about zoos. This one was not without its flaws, but it was okay. I particularly enjoyed watching the Irwin family feed the crocs! Chuck graciously signed me up for the “koala cuddle”, which only had one spot left. It was just me and three pre-teen girls with the handler, and I fretted about whether or not this was psychologically traumatic for the koala… but all it did was cling to me and poop.

I couldn’t find much on the internet about a koala bear’s experience, so I am hoping that means our interaction with the cutie was fairly inconsequential. But who the heck knows?! All I determined was that a koala is basically an infant. He was cute, with his soft, downy fur… but fairly uninteresting beyond that. The ‘roos were where it’s at! They are downright cat-like, with their confident, aloof personalities and propensity for relaxation.

On day 4, (after spending day 3 on the Gold Coast in a rather discombobulated manner with one of Chuck’s Aussie Army friends), we flew to Townsville. By this point, I had already contracted what Chuck dubbed “the bird flu.” The lady next to me on the plane from LA was sick, so I was bound to come down with something, but I assure you – it wasn’t the bird flu 🙂 Still, I was in rather rough shape on our travel day. But, honestly, I would rather be in rough shape on travel day than on adventure day! I suffered through the flight and road trip north to Cairns, and only missed out on frolicking in the lovely Josephine Falls. Of course, Chuck was able to frolic, and even he admitted that it was quite cold! Still, I’ve always dreamed of enjoying natural waterfall slides… but it was fun to watch Chuck enjoy it.

We made it to Cairns and checked into Il Palazzo Boutique Apartments Hotel, which

was honestly nothing to brag about. It was conveniently located amongst shops and restaurants though, and the largely Asian-themed Night Market. We were able to walk to the meeting point for our primary Cairns adventure: snorkeling the Great Barrier Reef.

Our tour was highly commercial, but not overly crowded. I had been forewarned that it wasn’t going to be as spectacular as one might imagine, in part because they don’t take tourists to the best, most preserved parts of the Reef. Indeed, one of the staff members on our ship, Evolution, confirmed that the two areas we visited were mostly dead, or actively dying, due to climate change and pollution. So depressing!

Nonetheless, it was a breathtaking scene and I’m so glad I decided to snorkel one of the spots, despite my sickness. I was enamored with one particular fish (which I think was the parrot fish) who flashed beautiful iridescent shades of blue, green, pink, and purple. Chuck opted to dive, especially since snorkeling was a challenge for me and my breathing/sinus issues (not to mention the particularly choppy waves that day!) He saw some amazing sights, and I can’t wait until he uploads his GoPro footage. 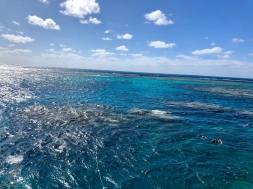 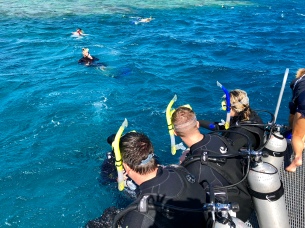 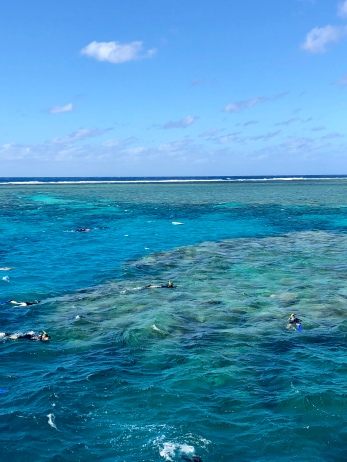 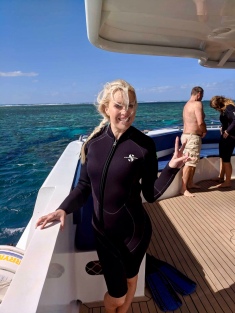 Our last big adventure was a trip to the rainforest. Australia is so vast and diverse – that even though we visited such a small corner of the continent – I wanted to diversify our experience as much as possible.

And let me clear – we didn’t get that deep. Or all that authentic. We were averse to spending more time in the car than necessary, considering our trip was about to wrap up. So we drove about an hour outside of Cairns and visited the charming, but touristy, “rainforest” town of Kuranda. I thought it was great, despite its Epcot-like approach to culture. I knew I wouldn’t get a truly close-up experience with anything Aboriginal, but I appreciated the attempt at originality that Kuranda provided. We strolled the town, admired the artwork, longed for the pricey didgeridoos (which I called “diggity roos”), and shunned the depressing kangaroo furs and skins. (Seriously… I legit gave one vendor the stink eye! Wear your own damn skin!)

I enjoyed the Butterfly Sanctuary, ate some amazing nasi goreng (a favorite Indonesian dish from our trip to Bali!), and ventured to Barron Falls, which featured some spectacular, Man From Snowy River-worthy panoramas. 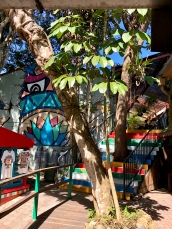 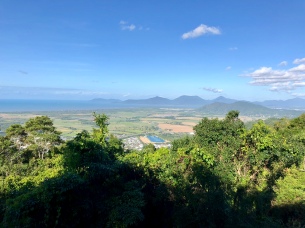 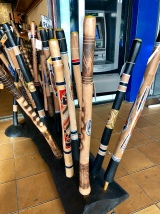 Another unexpected highlight was the opportunity to meet up with a dear college friend. Carolyn travels around the world, and sometimes, we find ourselves in the same corner of the planet at just the right time…! 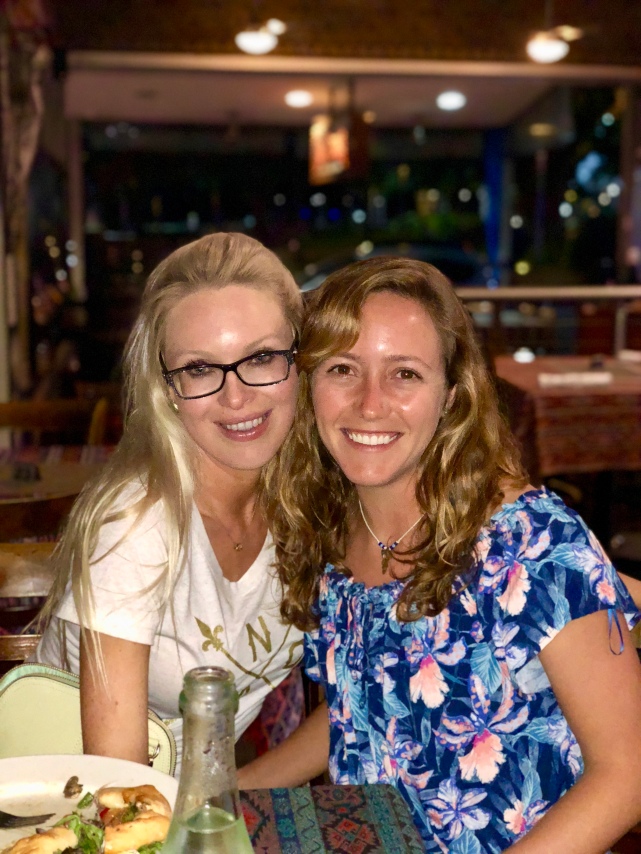 I wonder where we will find each other next?

All in all, Australia was a great experience. It did not provide the unique perspectives that places like Cambodia, Japan, France, Thailand, Bali, or Laos invite, but it was special in its own way (Chuck… and ‘Roos.) It’s another country, another World Wonder – another continent! – to check off the bucket list.

And in conclusion, I’d like to leave this for consideration… LOL! Enjoy.

One thought on “The Land Down Undah”