One of my favorite quotes of all time is by my man, Ralph Waldo Emerson: “Earth laughs in flowers.” You can find it all over my social media profiles, and I even considered getting it tattooed somewhere on my body, I love it that much.

I’m sure no one is surprised, given my incessant floral photography and love for both Earth and laughter. I don’t even know how I found it, originally – probably on Pinterest, or something extra #basic like that. Although I knew it was an Emerson gem, I had only ever seen it standing alone — never within the context of a larger piece of writing. Until now!

END_OF_DOCUMENT_TOKEN_TO_BE_REPLACED

Hey y’all. It’s been a minute. No, it’s been a YEAR. Except, wait. It’s only been just-over-half-a-year. Feels like decades, you know what I’m saying? But now I’m just being dramatic.

I don’t need to re-cap the debacle that has been 2020, but I do want to pop in to say that it’s time for a personal re-brand. If you’ve followed me a while, you know I went from Pink Piglette, to Bad Kitty, to Keep Calm & Have a Cupcake, to the Gypsy Kitty Diaries. Each rendition of me was right for the time and place in which I found myself. But this year, given my ongoing and imperfect attempts at self-improvement, I’ve decided to move on from Gyspy Kitty and tell my story through a new lens (or filter, if we truly want to keep this 2020.)

END_OF_DOCUMENT_TOKEN_TO_BE_REPLACED

When it comes to leisure travel, this year has been remarkably slow. Chuck’s schedule is itinerant, and we haven’t been able to lock anything down. One night, after imbibing a few spirits, I spoke with girl friends about taking a short getaway trip of our own – somewhere the guys wouldn’t miss. Singapore, perhaps? I knew Chuck wasn’t interested in Singapore, but it would offer all the essentials for a cosmopolitan girls trip – food, shopping, dancing, and shining lights! It would provide a glitzy adventure to balance our laid back lives in Okinawa…

My friend Sally agreed to book the trip with me, and we set out on our long weekend adventure full of energy, laughter, and hope. Never mind that we ended it hungover and exhausted, despite our best intentions to avoid such a scenario… but I guess there are some lessons we will just never learn! END_OF_DOCUMENT_TOKEN_TO_BE_REPLACED

Not everything about this past weekend was depressing. During the “up” times, Chuck and I ventured out twice to explore some local Okinawan attractions. The first was Fukushuen Gardens in Naha, which is actually a Chinese-style garden established to honor the relationship between China and the Ryukyu Islands (of which Okinawa is a part.) The relationship goes back over 600 years, and as I have noted in previous posts, there is quite a bit of Chinese influence here.

The gardens were lovely and expansive, even if the water was rather sickly green. I particularly enjoyed the large waterfall, the numerous turtles and fish, and the gazebo-like structures scattered about for relaxation and shade. Of course, there could always be more flowers! I told Chuck that when we are older and richer we can have a garden like that… so long as we get a professional landscaper to do all the work, since I have a brown thumb! 🙂 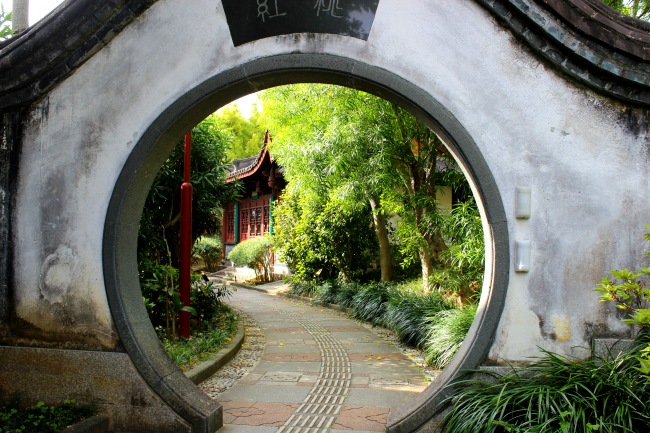 The second trip took us to nearby Katsuren Castle, which is only 25 minutes from where we live. In fact, we could see our Tower from the top of the Castle! Now, when I say castle, I actually mean ruins. There isn’t much to the place, but it makes for a fun excursion nonetheless. It dates back to the 15th-century, when a lord named Amawari reveled in its golden era. It is perched on a magnificent hill with a simply stunning view of the ocean and the village below.

Side note: it’s really interesting to see how the Japanese manage their tourist attractions. There were quite a few occasions where I thought to myself, “This would NEVER fly in the U.S.!” Case in point, the fact that there is no railing on the top of the castle (note the lower left corner photo of me standing on the ledge in the above collage.) There were a number of high-risk areas in the Fukushuen Gardens, as well – gaps in walkways over water, slippery stones, etc. Not that I mind. I actually really like that there is no added hindrance to the beauty of the sites. But in my American mind, I could only think of the lawsuits that could come out of places like these. The accidents! The children! Oy vey.

Anyway, here are some more shots of Katsuren Castle and its surroundings. I kinda want to go back for a romantic late-night picnic someday. It was completely unsupervised 😉 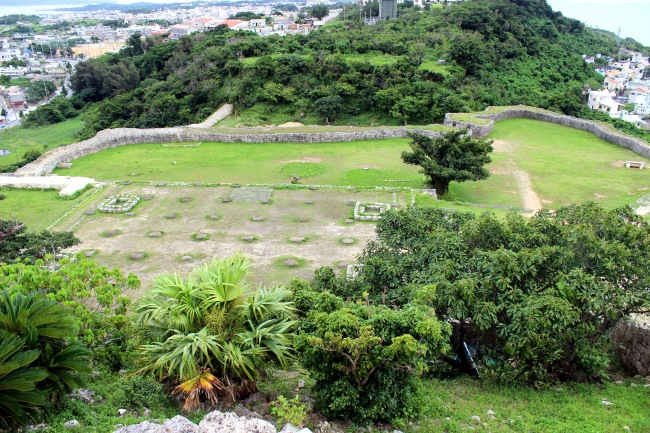