“Let us read and let us dance. These two amusements will never do the world any harm.” – Voltaire 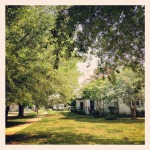 Morning run around the new ‘hood (yes, I ran.) This is not quite the part I live in, though 🙂

Confession: I follow Playboy on Instagram. Of all the “smut” magazines out there, I can handle Playboy and find their shoots sexy and creative. I enjoyed watching “Girls Next Door” and I’m fascinated by the organization from a sociological perspective, too (in both good and bad ways.) I know it’s weird and contradictory…but…. Ugh. So, sue me.

Now that that’s out of the way… I was scrolling through my feed when I noticed the following post:

I got pretty excited, because it’s not often you see a fair-skinned beauty featured in Playboy.

But then, I noticed the comments.  I know there are always going to be haters and your occasional obnoxious remark, but the comments directed at Miss Kassielyn were almost exclusively critical…and hateful.  I seriously couldn’t believe my eyes.

Now, anyone who knows me even a little bit knows that I’ve dealt with major insecurities for being skinny and pale, and that I can’t really help either. Both are genetic. I’ve been taunted for both, and called unattractive for both – more or less subtly.  Just as I smiled with happiness that a different kind of sexy was gracing the Playboy name (more associated with curves and golden glows), I got that old pit in my stomach that I get when I feel unattractive and inadequate.

I realize I shouldn’t put so much emphasis on physical appearance, but our culture is saturated with it (as are most cultures, with varying definitions of beauty.) We all have a particular standard of “sexy” shoved down our throats – it’s unavoidable, and of course, very few of us match.

I also recognize the danger of the “thinspo” subculture and am definitely not trying to promote any one body type over another, but it’s discouraging to watch my type get virtually trampled under everyone’s smartphone-wielding finger-feet… especially since I am healthy and not doing anything wrong. And it’s certainly not the first time!

I was seriously about to email the screenshot of the model to Chuck and say “It’s good to see a pale girl in Playboy!” before I saw that apparently, it is still considered ugly or gross to be pale and skinny after all…

And for the record, I am aware how silly this may sound (normally, it’s good to see a curvy model in most magazines, etc), but it just goes to show you how there are always two sides to every coin. If people could only think twice about being so critical!

Can you tell I’m ready for spring nails? Thank goodness February is a short month 🙂

New addition to my desk: jumbo kitty coffee mug. I don’t think I can even drink that much coffee…

Had a fantastic MLK, Jr weekend with fab weather and fun friends (old and new!) It felt good to go out and dance a little!

76 and sunny here today, in the middle of January. Love Indian summers.

Amazing little guy I met at Petsmart last week. Adoption is always the way to go! Can’t wait to do it again for kitty #2 🙂

I discovered that if I add hash tags to my photos (legitimate ones that people would actually search for), my pictures get a LOT more exposure. It’s kind of exciting! Especially since Instagram is a good bit more anonymous than Facebook. It’s also a little sketchy, though. I tagged one photo with “girl friends” and another with “feet” and “pedicure”, and as it turns out – Instagram has weirdos. They need to update the app so we are able to delete comments… or is that already possible and I’m just missing it?

Anyway… I use hash tags all the time here on Tumblr, but it doesn’t seem to work for me quite like it did for Instagram. Maybe it’s better that way 🙂 Sometimes it’s better to lay low, but it’s also nice to have a random audience that enjoys what you have to share. So long as they’re nice! And totally not sketchy… ha!