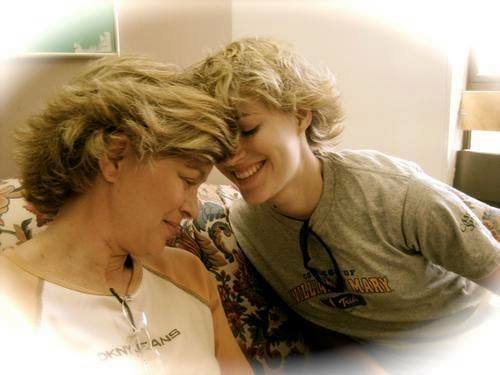 I took this photo of my mother and my sister during one of our many visits to a mental hospital in northern Virginia, many years ago now. It was a lucky capture of something increasingly fleeting – tenderness, trust, and a smile, between a mother and her daughter. I haven’t been secretive about my mom’s descent into severe mental illness. It is highly stigmatized, which is stupid, because that makes it far more difficult for all of us to bear. So I will always speak up.

Mom battles Delusional Disorder and Paranoid Personality Disorder, which have no cure and no trusted form of treatment, due to the patient’s inherent suspicion and lack of insight into her condition. We’ve seen her through psychotic breakdowns, hospital stays, suicide attempts, jail time, and homelessness. As hard as that is, the reason it’s most excruciating is because Mom was our best friend growing up. She was a loving and energetic person. But her delusions have transformed Bonni, my dad, and I into the enemy, causing her a great deal of fear, anger, sadness, and pain – which causes her to lash out. And now, it’s hard not to hate the manipulative and abusive person she has become.

As I get older, it’s harder to remember who she always was. And that person – let me be clear – is long, long gone. Dead, if you will. But at the end of the day, the one who suffers most, is her. Fear is her reality. Truth has no meaning. Death will be her only freedom. And we are all vulnerable. But most certainly Bonni and I.

Few can capture this as poetically as my sister does, so I wanted to share her most recent verse below. My favorite line is “Hope feels like chasing gold at the end of yesterday’s rainbows.” After long meetings with social workers, clinicians, and law enforcement, sometimes Bonni and I would just look at each other in defeat, simultaneously murmering “hopeless.” It became our punchline, and actually gave us the comic relief we often needed, resulting in laughter over our dark inside joke. We talked about getting “Hopeless” tattoos, while everyone else got cheesy inspirational ones. How’s that for sisterly bonding?

Anyway, see Bonni’s poem below! In the meantime, go out and love each other. Everyone has that battle to fight.

***For anyone who has lost someone dear to them to mental illness.***

Sanity:
What matters most to me.
Sanity:
Feels like a genetically tenuous string
Connecting me with everything I hold most dearly.
The mind feels like a delicate and fragile thing.
If you had grown up with me, then maybe
You would trust what I’m saying.
You would understand intimately the fear of losing
Your familiarity with reality.
You would know just how terrifying it would be
To have to question absolutely everything,
Because nothing is as it seems.

Perception is off and you don’t know what to believe
Which phantoms are people or what’s deceit
And what’s trustworthy.
It’s got to be lonely in the Unknowing.

A betraying memory means everyone’s guilty.
If no one is worthy then disowning them all
Seems more than reasonably tempting,
We are speaking into my biggest fears here.

I look into the face of someone who died years ago.
You can’t really grieve someone who’s technically here, though.
In a world where even suicide is less of a sorrow,
And Hope feels like chasing gold at the end of yesterday’s rainbows.
Making me feel like something less than human,
Though it takes acumen to see death as really
The only proven movement or reference for deliverance.

But how inhuman is that?

I’ve questioned my humanness, forwards and back,
Spun my wheels to the ears of Creator ‘til they spun
Off the tracks;
Chased my fears in the bat black night of emotional combat,
Until combat became the habitat my heart turned acrobatic tricks in
So therapists could call them overreactions.

Yes, these riddles feel like obsessions,
So many confessions,
Chose my profession for the progression
Of these answerless questions.

Why must any person suffer?
Perhaps with the invention of the right intervention
Offered to some unrelated other,
I can offer some comfort to the malignant struggle of my
Own Mother.
Mental illness has stolen so many parents,
Aunts, uncles, sisters and brothers,
Sons and daughters,
Cousins and best friends.
Every story needs an ending but
I don’t know how this story ends yet –
So I will bookend this poem with two
Determined semicolons,
The mark of something that could have ended,