Meet and greet at the Gavin DeGraw concert 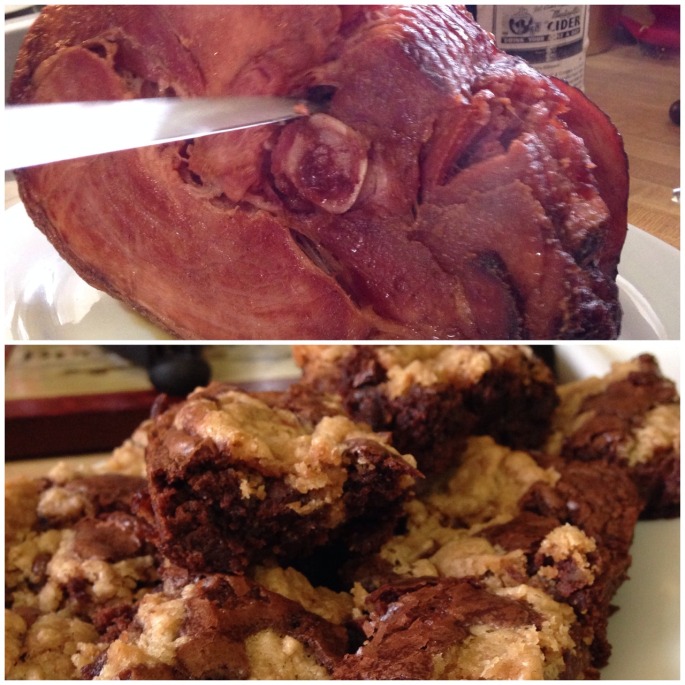 Two of my favorite culinary items from this past weekend’s Army/Navy Football + Christmas party are pictured above: jumbo spiral cut ham and chocolate chip cookie dough brownies! I also loved the mashed potatoes, but they aren’t quite as photogenic 🙂

The party was a hit. It was pouring rain outside, but pretty much everyone we invited showed up. After the game (yawn), we played a rousing and hilarious game of Cards Against Humanity, and then played with the XBOX Kinect until our knees and joints ached. I never tire of Dance Central!! I looove that came, and of course – I always win 🙂

This is our last week before we head home to Virginia for the holidays! It’s pure admin before we go. Medical clearance for Japan, various appointments for government passports for Japan, random miscellaneous paperwork… you guessed it, for Japan. I feel so bad for poor Annie. Her past two Japan-centric visits to the vet were traumatic enough, but the worst is yet to come! Early January, she has to get a blood test that will require tying her up and restraining her, since they will take the blood straight from the jugular. They will ask me to leave the room 😦

Probably a good idea, to be honest. It’s gonna be heartbreaking! 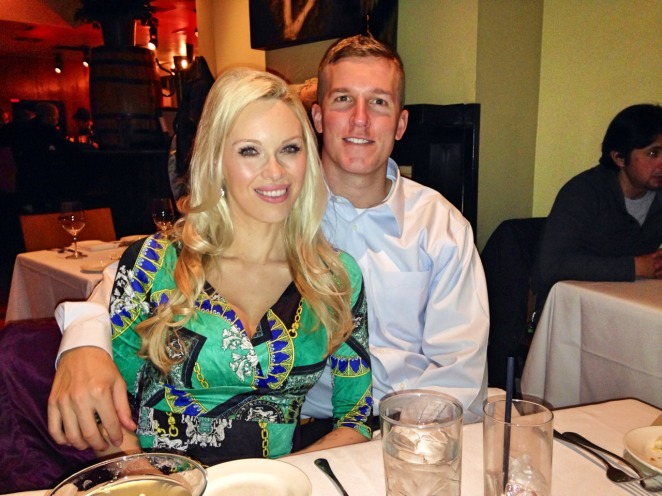 Chuck and I ended up turning a relatively quiet Thanksgiving weekend into an impromptu adventure in Atlanta, with our friends Janet and Terry. We started at the Atlanta History Center, where we toured the Swan House, the Smith Family Farm (I fed the chickens!), the American Civil War Exhibit, and the Centennial Olympic Games Museum.

Then, we toured the SweetWater Brewery (the boys’ vote), where I sampled six different beers and learned how it’s made (go me!) I also befriended an adorable mastiff puppy with a gimp, named Ellie.

We checked into our lovely room at the Ritz-Carlton (milso’s, take note: military rate is amazingly affordable!) and freshened up for dinner at South City Kitchen and a performance in Midtown by the Atlanta Symphony and Cirque du Soleil. We wrapped up the evening at the delightfully stereotypical Havana Club for some dancing. We even learned to salsa!

Sunday we hit up the World of Coca Cola, which was more of a brainwashing/marketing overload than a true museum experience. It was pretty neat, but I think all of us are happy to avoid Coke for a while…

We got home later on Sunday – exhausted, but happy. It’s nice to get a taste of city life when we can… I have missed it!

This is the first full week I’ve had in a while where I have nothing big coming up, and I’m not recovering from anything just past. The next several weeks should be like that, which is kind of nice. Here’s a small life update:

That’s pretty much it. My brain is feeling kind of warbled today (been battling a headache since 2 AM!) so I’m not even sure I’m making much sense. I can’t believe Thanksgiving is next week already – and Christmas is just about a month away! In some ways, time sure is flying…

Wow! I made it through the busiest of my wedding weekends – the double whammy in Charleston and NYC. It was quite the adventure (I am still recovering), but I am so glad I was able to make both weddings. They were just so beautiful! Happy, fun, and simply romantic.

Friday night was my friend Laura’s wedding at the Legare-Waring House in Charleston. It was classic, feminine, Southern romance. The House was on Charles Towne Landing – a historic, plantation-like piece of land dripping in Spanish moss and old timey mystery. I got to catch up with a few girl friends from DC and even encountered an alligator – almost ran the sucker over. Laura was just stunning as expected!

Early Saturday morning, I booked it to the airport and flew to LaGuardia for my friend Wendi’s wedding – “A Night in Brooklyn.” It was at the delightfully French Bacchus Bistro (umm… DELICIOUS…more tuna tartare, please). A few of the girls got together for bonding and primping at the Sofia Inn beforehand, and I spent most of the evening reminiscing with old college friends and sharing stories with newer ones.  Wendi was just ravishing. Her entire wedding was DIY! It came together so magically.

The only “downside” all weekend was that Chuck couldn’t make it! The punk busted his knee the night before we were scheduled to leave for Charleston, and we spent early Friday AM in the emergency room. He has a torn MCL, and strained ACL. The weekend’s logistics were convoluted, so we thought it best to not risk bringing him along. It made for a slightly more convoluted set of logistics for me on my own – an extra six hour drive and a flight change – but at least my legs are in tact to make it work – thank goodness! 🙂

Anyway, congrats to my lovely friends, Wendi and Laura! xoxo

Well, it’s just about here. Chuck and I move to Georgia early on Thursday morning. We spent our last weekend in North Carolina doing dinner and a show at River Landing, meeting up with friends, and of course, walking on our gorgeous little beach! I sure will miss this little gem in our landlocked town in GA…

What a fun weekend down in Surf City! I’m glad the week is over though. With family and friends in town since last Sunday, all while sick and working, I am beat! I woke up at 3:30 AM this morning to see off a friend catching an early morning flight, so I am chugging the coffee and pounding the vitamins to keep from relapsing…

On another note, this is my last full week at the Chamber. I am sad to leave, but more ready than ever at this point. The mental detachment phase is fairly complete, and I have “senioritis” like none other! I’ve transitioned all my work to my replacement by now, so I pretty much just putz around. I have a lot of meetings this week though, so it shouldn’t drag too much. Regardless – I’m excited for one more week’s pay, no matter how slow it is! 😉

For those of you who were wondering, I got my speeding ticket reduced to 9mph over (about what it should have been in the first place), which means no points for me – even if I still had to pay. Seriously though, what a racket!

Anyway, the office closes at 12:30 today and I am ready for a fun weekend. Chuck’s family rented a beach house for the next week, so we will see them plus my friend Laura, who will be in town for the weekend visiting her mom. I think we’ll meet her and her fiance downtown for drinks Saturday night. I always love seeing Laura.

In other news, while hanging out at the courtroom all morning, I caught up on my Rick Steve’s Italy Guide and read all about Lake Como. Coincidentally, I also found a gorgeous photo of this scenic spot on Pinterest (which I promptly pinned to my Bucket List board, of course.) It is rather out of the way for my current itinerary, but now I want to find a way to work it in… it looks so amazing!

What a dreary day today! I stayed in bed with the Bean till 11:15 this morning, because a) I can, and b) what else is there to do? I must say though – it was kind of nice, and Annie sure enjoyed it. I got a few fleeting and choppy moments over Gmail with Chuck while I ate breakfast. I can’t decide if those choppy moments are worth it, or if I’d just rather wait to hear from him when we can actually have an uninterrupted conversation.

It’s supposed to rain all day, so I may try to work out and clean. Or, maybe I’ll just continue to do nothing 🙂 There’s a women’s social at Chuck’s old Captain’s house tonight that I plan on showing up to, if it’s not too gross.

Tomorrow is supposed to be 62 and sunny (YES!) so I’m thinking I will take Annie to the beach in the afternoon. Gotta get her annual beach trip in before the tourists come! 🙂 She’s so funny at the beach! 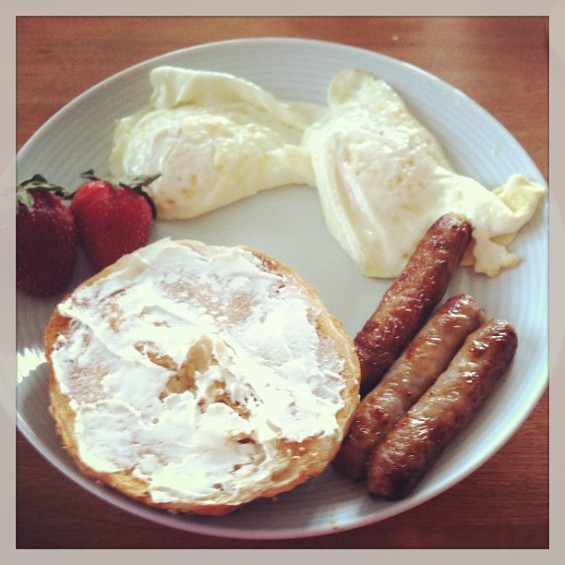 I was homesick for Chuck’s delicious weekend breakfasts, so I attempted to make my own and was very pleased with myself! Just look at dem eggs!